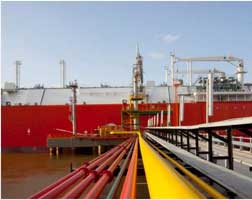 Syed Ashfaquzzaman, secretary of Petrobangla, and Luc Speeleveld, head of LNG for Asia of Gunvor Singapore PTE Ltd, signed the memorandum of understanding at a program at the former’s headquarters in Dhaka.

In a statement, Nasrul Hamid, Bangladeshi state minister for power and energy, said the government signed MoUs with RasGas of Qatar, Oman Trading International of Oman, Pertamina of Indonesia, Astra Oil of Switzerland and Gunvor Singapore to buy LNG.

Forty one companies have expressed willingness to supply LNG through spot market to Bangladesh after the government sought “expression of interest” on August 17 this year.

A panel will be formed to sign the sales and procurement agreement, said the minister. “The crisis of gas will start to go away from April next year,” he said.

The minister said 500 million cubic feet of LNG would be imported every day from April next year, which will be used in Chittagong region.

Another 500mmcfd of LNG would be added to the national pipeline in October 2018. “This LNG will be used in the central parts of the country.”

He said although the Chittagong region would be served initially, the impact would be felt in other parts of the country.

The government has also taken up plans to establish LNG-based power plants.

Hamid said the LNG would be blended with the local gas before being supplied to industries. “Although the gas price will go up to some extent, it would be helpful for them ultimately.”

The LNG imports will bump up the supply for consumers by 37%.

The country has been dogged by serious gas shortages for a long time now, crippling industries. It currently has a supply of about 2,700 mmcfd from various gas fields against the demand for 3,300 mmcfd.