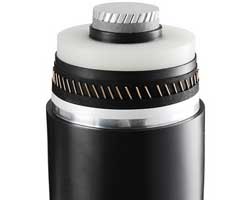 Austrian chemical firm Borealis says in its efforts to facilitate a more sustainable energy future, it has introduced the high voltage direct current (HVDC) cable compound based on its Borlink technology. It is being used in crosslinked polyethylene (XLPE) power cables qualified for the tender of the “German corridor projects“. This undertaking will transport renewable energy from wind farms off the north coast of Germany to southern areas of the country.

Borealis says its Borlink is “a crucial component” in XLPE high-voltage power cables enabling HVDC technology transmitting electricity over longer distances with minimal losses. What is more, the material XLPE offers the additional sustainability benefit of being recyclable.

Borlink LS4258DCE, an unfilled XLPE insulation compound, along with the accompanying HVDC semicon Borlink LE0550DC, was initially launched in 2014. This was a step-changing innovation because it enabled the use of extruded cable technology at significantly higher voltage and transmission levels than ever before. This cleared the path for XLPE extruded technology to allow a more efficient transmission of renewable energy from remote sources to the grid, contributing to a low carbon energy future.

Yet XLPE offers even more than superior, waste-minimising performance: it is also recyclable. By sorting, separating, and grinding XLPE cable waste, for example in the form of redundant cables, valuable and durable materials can be reclaimed. Among other applications, XLPE recyclate may be used as filler in various polyethylene (PE) and polypropylene (PP) compounds.

One Borealis partner, the leading power cable provider NKT, recently announced that it is one of the first cable manufacturer to use recycled XLPE in the production of cable drums. NKT was able to contribute thereby to the circularity of polyolefins in the power cable industry. It is further estimated that this process saves approximately up to around two tonnes kilos of CO2 for every tonne kilo of recycled XLPE.

“Borealis is contributing to decarbonisation in multiple ways,” says Lucrèce Foufopoulos, Borealis Executive Vice President Polyolefins and Innovation & Technology. “The successful qualification of Borlink technology for the tender of an infrastructure project like the German Corridor projects shows that we have come full circle. Our polyolefin-based innovations have become crucial links to the energy transition.  This is just one of many examples of Borealis’ contribution to a “greener future for all” through innovation and collaboration.

In line with efforts to enhance sustainable development in all aspects of company operations, Borealis says it is reducing its CO2 footprint at its own facilities. By 2030, the company aims to have significantly reduced CO2 emissions from operations by using 50% of electricity from renewable sources; by increasing energy efficiency by 20% compared to a 2015 baseline; practicing zero continuous flaring; and capitalising on opportunities for carbon capture, utilisation, and storage. To this end, current projects in Europe include: