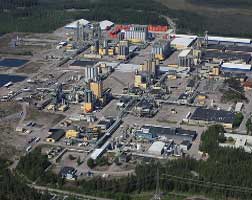 Austrian chemical firm Borealis is investing EUR17.6 million in a new Regenerative Thermal Oxidizer (RTO) for its polyolefins plants in Porvoo, Finland. This equipment will significantly lower the site’s CO2 emissions, reduce flaring and save around 60 gigawatt hours (GWh) energy each year. Project kick-off is in February 2021, with completion planned for 2023.

Borealis adds that it has implemented a wide range of measures and programmes to protect the climate and ensure the more sustainable development of all of its business areas. In its mission to reduce the company’s CO2 footprint at its own production facilities,

It has identified several integral goals. Using the year 2015 as the baseline, Borealis aims for a 20% improvement in energy efficiency by 2030. The installation of a new RTO – a piece of air pollution control equipment designed to treat exhaust air – along with the requisite piping for the polyolefins plants, will generate approximately 16 bar steam. This newly-won steam will replace around 50% of the heat energy currently required for Porvoo Polyolefins operations in a cleaner and more efficient way. Projected annual energy savings are approximately 60 GWh.

It also aims to significantly reduce CO2 emissions from its own operations. The investment in an RTO allows the Porvoo plant to generate its own steam instead of drawing on steam from the external source. This means that nearly 18,000 tonnes of indirect CO2 emissions – referred to as Scope 2 emissions in the Greenhouse Gas Protocol – which would otherwise be released into the atmosphere can now be avoided once installation has been completed in 2023.

The 18,000 tonnes of CO2 equals the average annual emissions of 10,000 passenger cars. Further emission reductions will also be won starting around mid-2022 thanks to the two long-term purchase power agreements (PPAs) to source power generated from Finnish wind farms. These PPAs alone elevate the share of renewables in Porvoo’s overall electricity consumption  to 13%, thus moving Borealis yet another step closer to its goal of sourcing 50% of electricity consumption from renewable sources in its Hydrocarbon & Energy and Polyolefins operations by 2030.

Finally, another integral energy and climate goal is to achieve zero continuous flaring. While flaring is a necessary measure used in petrochemical operations to safely burn excess gases which cannot be recycled or otherwise recovered, flaring results in emissions and noise. The practice also incurs high operational costs. The new RTO will decrease flaring at Porvoo by around 6,000 tonnes/year.

“The varied measures being implemented at our Porvoo production location to help combat climate change are exemplary for the entire Group,” says Martijn van Koten, Borealis Executive Vice President Base Chemicals and Operations. “Part of our commitment to bringing about a carbon-neutral future means re-inventing for more sustainable living. We will continue to find innovative ways to protect the climate by reducing our own environmental footprint.”