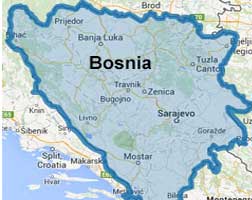 Bosnian gas distributor Gas-Res and Russian oil and gas company Gazprom SPG will be forming a joint venture that will build a liquefied natural gas (LNG) plant in Bosnia’s Serb-dominated region, according to a regional television report.

The plant, which will be majority-owned and financed by Gazprom SPG and built in the eastern Bosnian town of Zvornik, will cost an estimated EUR70 million (US$82 million), officials said during a signing ceremony in Banja Luka.

The president of Bosnia’s Serb Republic region, Milorad Dodik, said the factory would use Russian gas transported to Zvornik via Serbia and would help to improve the security of energy supplies to the region.

Russian officials said the energy produced could be used for heating and in transportation, the broadcaster reported.

Bosnia, which is divided into two highly autonomous regions – the Serb Republic and the Bosniak-Croat Federation – relies on Russian supplies via Ukraine, Hungary and Serbia to get some 350 million cubic metres of gas that it needs per year.

A European energy regulator has warned the Balkan country – which wants to join the European Union and access financial support for its energy market – that it needs to pass a gas law to comply with the bloc’s energy regulations.

However, the Bosnian Serbs oppose having a national strategy and want instead to pursue their autonomous energy policy. Dodik is nourishing political and economic ties with Russia.