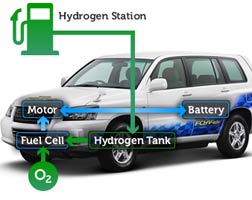 Scientists turn our attention back to hydrogen-based energy as they discover new methods and materials to make the process more sustainable.

One of the major challenges to developing affordable hydrogen fuel cells has been storage. Hydrogen is explosive and requires costly containers to hold it safely. But recently, scientists have shown that formic acid is a good candidate for storing hydrogen. The common industrial chemical — also the stuff of ant venom — is stable and inexpensive. One molecule of the acid is made of five atoms, two of which are hydrogen atoms. But splitting the formic acid to release hydrogen and produce electricity requires a lot of heating and processing. So scientists Qi-Long Zhu, Nobuko Tsumori, Qiang Xu set out to find a better way.

The researchers developed a simple method for producing a palladium-based nanomaterial that can spur the breakdown of formic acid into hydrogen and carbon dioxide. Its efficiency far exceeded that of any other reported heterogeneous catalysts, they say. They also found that their process only produced carbon dioxide and hydrogen without carbon monoxide contamination, which has been a problem with other methods.

The paper “Immobilizing Extremely Catalytically Active Palladium Nanoparticles to Carbon Nanospheres: A Weakly-Capping Growth Approach” is published in the Journal of the American Chemical Society

The authors acknowledge funding from the National Institute of Advanced Industrial Science and Technology in Japan and the Japan Society for the Promotion of Science.