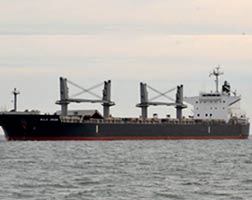 Scientists conclude that switching from petroleum to natural gas reduces greenhouse emissions, but ships should be checked to avoid leaks.

University of Delaware’s James Corbett, a professor of Marine Science and Policy in UD’s College of Earth, Ocean, and James Winebrake, a professor at Rochester Institute of Technology, and recent UD doctoral graduate Heather Thomson worked on the study.

The study published this week in the international journal Energy Policy evaluated whether a transition to using liquid natural gas (LNG) to power marine vessels can reduce both local pollution and greenhouse gas in the marine environment, and whether fueling ships at major ports can help develop the natural gas infrastructure.

“Local and regional air pollution benefits of liquefied natural gas are a slam-dunk over traditional marine fuels, and the long run price of LNG looks to be advantageous. But LNG was not a clear winner for climate change with regard to greenhouse gas implications, especially if the fuel supply infrastructure is not designed to minimize natural gas losses,” Corbett said.

According to Corbett, a successful transition to LNG will require a carefully constructed infrastructure development policy that requires state-of-the-art infrastructure that minimizes leakage at the earliest stages of the fuel cycle.

The researchers used an advanced method known as a “technology warming potential” (TWP) approach to analyze the life cycle of LNG production and delivery over three case studies.

The case studies represented typical marine vessel trips in the following categories: local, regional and long haul cargo transportation. For each case study, the scientists compared LNG to commercial marine diesel fuels traditionally used in the industry. The approach accounted for emissions of nitrogen oxides, sulfur oxides and particulate matter in each case, while also quantifying and comparing greenhouse gas emissions including carbon dioxide, methane and nitrogen oxides. The scientists also considered regional drivers that might influence the adoption of natural gas as a marine fuel.

This study considers the entire lifecycle, from the extraction of natural gas from the ground to the production of LNG to its ultimate use, providing a more complete accounting of the co-benefits or trade-offs of energy policy decisions related to ship fuel choices and natural gas development.

The study finds that natural gas in marine engines may reduce greenhouse gases (lower technology warming potential) under certain conditions and timeframes. However, these conditions depend upon low-greenhouse gas LNG infrastructure and advanced combustion technologies to reduce methane leakage.

“Our work shows the need for investments in a low leakage infrastructure, and further innovations by engine manufacturers to capture and prevent the release of methane during engine operation, in order to ensure greenhouse benefits to switching to LNG accompany the air pollution and economic benefits,” Corbett said.