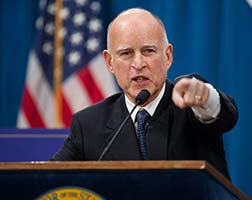 Governor Jerry Brown is pursuing an ambitious plan which will see the expanded presence of clean energy in California.
If successful, the plan will see PacifiCorp, a utility serving six Western states, brought into the electricity grid run by the California Independent System Operator.

If successful, it could make solar and wind energy available more widely throughout the West — a potential victory for Brown, who has sought partnerships beyond California’s borders in his fight against climate change.

Get the essential California headlines delivered free >>
“This would be gigantic,” said Carl Zichella, an environmental advocate who works on energy transmission issues for the Natural Resources Defense Council. “All of California’s climate laws were intended to drive policy in other states and at the federal level.”

The proposal has not yet been formally introduced as legislation, but it is part of the conversation as lawmakers debate measures for combating climate change in the final two weeks of the legislative year.

The governor’s office declined to comment on the issue.

The California Independent System Operator directs electricity from utility companies to 30 million customers in California and some of Nevada.

The two organizations agreed in April to study the possibility of integrating their systems, and officials at both operations said the Brown administration has been working with them.

Possible legislation could include changing the board of the California system operator to include members from other states. Right now, the board is appointed by California’s governor and confirmed by the state Senate.

Brown “has been supportive of the concept of a wider footprint,” said Patrick Reiten, a PacifiCorp executive who handles the company’s transmission system.

Integrating PacifiCorp with California’s grid would require approval from state regulators and the federal government, a process that could take years. But officials said changing the board would be a helpful step.

“There’s a lot of benefit to this kind of geographic expansion,” said Oscar Hidalgo, a spokesman for the California Independent System Operator.

Assemblyman Henry Perea (D-Fresno), who supports the idea of integrating PacifiCorp, called it “one of the most significant policy changes we can make on energy in this decade.”

Boosting regional energy cooperation has been a key issue as California lawmakers consider requiring a greater share of electricity to come from clean sources.

Renewable energy can be difficult to manage because it’s impossible to control when the sun will shine or the wind will blow, and expanding the reach of grid operators could make it easier to ensure that energy supply meets demand.

“California really needs a regional market to be able to continue to build large amounts of renewable energy,” Zichella said. “We need a place to send that energy if we’re going to build more.”

State officials have started requiring utilities to store some excess energy, and a regional system is another way to address the issue.

The proposal could still prove controversial with some environmentalists who are concerned about PacifiCorp’s reliance on burning coal.

“This is a moment to ensure the state is taking the necessary steps to protect its own policy interests,” said Bill Corcoran, western director of the Sierra Club’s anti-coal campaign.

He’s concerned that electricity from dirty sources could make its way into California through a regional system, and he wants pressure on PacifiCorp to phase out its coal production.

Hidalgo said the system would be able to keep coal power out of California: The state’s cap-and-trade system, intended to promote clean air with fees levied on polluters, adds a financial penalty for dirtier fuels, making them less competitive on the market and less likely to be used on the grid.

“We’re seeing virtually no coal entering the state, because the economics don’t work,” he said.

There’s also the potential for opposition from unions, which want officials to focus on building new sources of renewable energy in California and keeping those jobs in the state, rather than on importing electricity from other states.

Steven Kelly, policy director of the Independent Energy Producers Assn. in Sacramento, said a regional system could make it tempting to build facilities elsewhere. Some states where PacifiCorp operates, such as Wyoming and Utah, have right-to-work laws that weaken unions.

“It’s so much easier to develop outside of California,” he said. “It’s a lot cheaper.”

Hidalgo said California’s grid operators are ready to expand their reach in the West, 15 years after an energy crisis led to rolling blackouts across the state.

“The grid has come a long way,” he said. “The energy crisis showed many flaws in the system that have since been cured.”