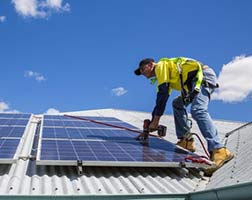 A community-owned organisation in north-eastern NSW is set to take on the big guns in electricity supply through a $4 million initial public offering to fund a renewable energy retailing and solar company it hopes will stimulate local renewable energy projects across the country.

This will fund a renewable eergy retailing and solar company.

It aims to capture customers in the Northern Rivers region, where retailing major Origin Energy dominates the market.

Ms Crook said Enova was not aspiring to be a major competitor of Origin but sought mainly to provide a customer for small wind farms, hydro power and bio-energy projects that were not large enough to be of any interest to major retailers as a green power provider.

“We see this as a game-changer to get community renewable energy really going in Australia,” Ms Crook said, pointing to similar community energy organisations that have sprung up in Germany and the US. “If we can get a replicable model going for financing then it can roll out rapidly.”

Ms Crook said as much as $80 million a year flows out from the region in operating expenditure and profits to energy companies and the aim of the initiative was to capture some of those funds for the region through dividends and social benefit projects, while reducing carbon emissions. She said the initial response from the community had been “very positive”.

Enova will sell 3953 shares at $1000 each, with a prospectus lodged with the Australian Securities and Investments Commission. The offer is not underwritten and the shares will not be tradeable on any exchange, but would be notified for sale on a community notice board.

The initiative, which was tested in a feasibility study, builds on the trend away from the centralised supply of electricity and capitalises on strong commitment in the region towards environment protection.

The study confirmed the feasibility for the community to own and operate their own energy company and displace large retailers whose supply is typically mostly provided from fossil fuels, providing it could raise at least $3 million for start-up and working capital.

The organisation intends to purchase accredited green power from renewable energy generators, along with the associated renewable energy certificates, and to sell that electricity to customers. It would also buy power from local solar PV units, encouraging the use of local generation to minimise transmission losses. It would support projects of up to 100 kilowatts in capacity.

Once profitable, Enova would invest an amount equal to the dividends paid to shareholders in community benefit projects that allow low-income residents to participate in energy saving and renewable energy schemes.

Enova, led by former Origin Energy senior executive Steve Harris as chief executive, has yet to obtain a retail electricity licence from the Australian Energy Regulator. But Ms Crook says in a letter to prospective investors in the prospectus that the grant of the licence is expected if the minimum $3 million raising is reached.

The directors said in the prospective that the “nimble and collaborative locally based social enterprise model” used by Enova could be replicated and scaled across like-minded communities in Australia.