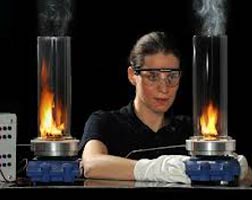 A San Francisco company that has come up with a less expensive technology to convert natural gas to gasoline, diesel and other liquids is seeking to put it to use on a larger commercial scale.

Siluria Technologies uses a catalyst to convert methane into ethylene, a building block for petrochemicals, and then another catalyst to turn that into liquids, primarily gasoline, Chief Executive Ed Dineen said in an interview this week.

“It’s a technology the industry has long sought after,” said Dineen, who was formerly chief operating officer of chemicals company LyondellBasell Industries NV.

With backing from Saudi Aramco and partnerships with well-known industry players including the Linde Group and Brazilian petrochemical company Braskem, Dineen hopes to break into natural gas processing with improvements that make the decades-old technology economical.

But Shell in 2013 shelved a potential gas-to-liquids plant in Louisiana when the cost spiked to $20 billion, and Sasol in January delayed its final decision on whether to build a similar project in the same state after oil prices tumbled.

Fischer-Tropsch has high start-up and operating costs that involve breaking natural gasapart into a synthetic gas, which can be converted into liquids, Dineen said.

He worked on that technology three decades ago with Arco in Alaska, where natural gasfrom the Prudhoe Bay oilfield was stranded because of a lack of pipeline infrastructure to move it to markets.

Among the challenges were the need to operate at such high temperatures that safety and costs became a concern, said Dineen. Also, some catalysts worked the first time but then fell apart, he said.

Siluria has been testing the technology at California facilities for several years, and more recently at Braskem’s demonstration plant in La Porte, near Houston. The company aims to commercialize it by 2017. – Reuters