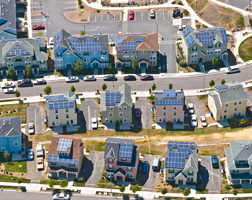 California is officially the first state in the US to require newly built homes to come with enough solar panels to offset their electricity use.

The state’s Building Standards Commission voted unanimously to add the requirement to the state building code.

The new code takes effect in 2020 and covers all single-family homes as well as multifamily buildings up to three stories high. There are exceptions for houses with too-small roofs or those in the shade. An average home is expected to use 53% less energy under the new code than one built under the previous standards.

Solar panels can cost up to US$10,000 upfront, but are expected to save at least US$19,000 in reduced electricity bills over 30 years, the state energy commission executive director Drew Bohan said.

Both environmentalists and industry representatives endorsed the changes.

“Six years ago, I was very fearful of this,” said Bob Raymer, technical director for the state building association.

“But after a compromise – in that new homes must produce enough power to offset electricity used but not natural gas – the association decided to support the move.”

Also supporting were members of the solar industry as well as Tesla, whose Powerwall battery is designed for home solar energy storage.

Of the 113,000 housing units being built in California a year, about 15% of them are being built with solar today, Vox reports.