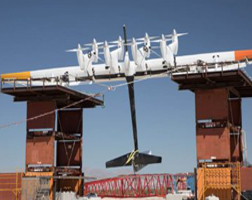 Makani, A Google X division company, has designed a giant kite that can generate enough wind energy to power about 300 homes. Named the M600 after the 600 kW of electricity produced by its movement, the craft resembles a sport glider with two levels of multiple propellers on the front, more generally described as an aerodynamic wing. After more than ten years of development and a prototype test flight in 2016, M600 has begun full size testing in Hawaii this year, and is set to become a portable power solution that can be brought anywhere with sufficient wind to propel it.

The functionality of M600 is fairly straightforward. After being connected to a 1400 foot high-strength tether, it uses 8 onboard motors to climb from a 15-foot base station to its determined altitude (about 1000 ft) with a small amount of voltage power. Then, it transitions into crosswind where it flies in 800-foot wide loops lasting 10-25 seconds each to generate maximum power via onboard computers guided by data from sensors, GPS, and an inertial navigation system.

The rotation of the 85-foot wide kite’s rotors drives magnet motors/generators on board, producing electricity that transfers down the tether where it can be connected to an energy grid. The electricity comes down in DC (direct current), but is converted to AC (alternating current) at its base station.

One of the needs driving Makani’s kite is accessing wind sources that aren’t practical or cost-effective in today’s markets. Its mass is about 10% of a conventional wind turbine with similar output thanks to the carbon fiber materials it’s primarily made from. The lighter, portable design of the M600 could help bring wind energy to areas devastated by natural disasters and places where coastal waters are too deep for other wind systems to sit on the seabed.

Google X is a development factory dedicated to radical innovations that tackle potential global problems. It provided the initial funding for Makani’s kite technology as part of its 2007 RE<C initiative and officially graduated the company into X in 2013. As part of X, the company is working towards the one of the division’s missions of promoting global adoption of renewable energy and developing airborne wind energy technology.

Makani is not the only company developing flying wind generators. The airborne wind energy (AWE) industry is full of competitors developing their own versions. As a new clean energy technology, though, AWE companies face an uphill battle in becoming commercially viable due to research and development costs that take years, a problem faced by many new industries overall. However, as the technology comes to market and matures, AWE could follow the path forged by traditional turbine wind power which is now competitive with fossil fuels. A recent report by IDTechEx projected AWE will become a multi-billion dollar industry within 20 years.

The Makani team is continuing to develop more advanced versions of its wind energy kite while discussing the technical and economic integration aspects of the technology with industry experts. Initial ground and hover tests of the kite begun in Hawaii in August this year. In the coming weeks, the full 85-foot commercial version of the M600 will finally be tested.