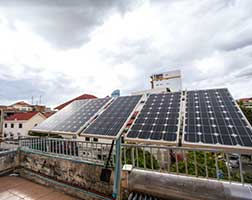 PHNOM PENH – Energy is a basic human need that must be fulfilled to achieve sustainable development. This kind of development is not possible without energy and policies to meet energy demand.

In Cambodia, energy is a critical development challenge. Today, only 35 % of the total population has access to grid electricity, leaving millions of rural population in the dark. Imported diesel fuel accounts for 90 % for domestic electricity production. Electricity prices are among the highest in the world.

Thanks to its rich waterway, Cambodia has the second highest hydropower potential in the lower Mekong basin. So far, only 10.3 % of the total 10,000 MW has been exploited.

While large dams can have negative effects on the environment and people, mini and micro hydropower projects are safer and more environmentally friendly. The estimated capacity of these small-scale dams is about 300 MW with present installed capacity of just 1.87 MW.

With plenty of sunshine, Cambodia’s weather is favorable for solar energy generation. The technical potential of solar power is 65 GWh per year but only about 2 MW of solar power has been installed so far. Thanks to the decrease in cost of solar technology, a local market is now emerging. As of today, more than 20 companies in Cambodia import and sell solar products.

Wood-fuel serves about 85 % of total energy demand and is used for domestic cooking. Currently, it is not used for electricity generation. Biomass has great potential as a fuel substitute and could reduce diesel fuel consumption by up to 75 %. Abundant agricultural residue and rapid growth of the agroindustry have resulted in growing biomass resources which can be exploited for power production.

Wind power is one of the least explored renewable resources in Cambodia. Wind speeds of at least 5 meters per second are available for electricity generation in the southern parts of the Tonle Sap River and coastal regions. The total electrical capacity from wind turbines is estimated at 3,665 GWh per year.

While Cambodia has large resource availability, harnessing such resources faces many challenges.

Second, there is a high risk perception among financers and project developers. Coupled with the lack of supportive policies from the government, this has led to low investment in this sector.

Third, the technology to harness clean energy is costly and not readily available in the country.

In 2003, the government introduced the Renewable Energy Action Plan (REAP) and the Rural Electrification Master Plan (REMP) to promote renewable energy development and utilization. Import taxes on solar PV components, biomass, and solar water heating components have also been cut substantially. But progress has been slow.

To effectively promote clean energy development, a more in-depth and inclusive policy package is necessary. The Government should draw up a comprehensive program for developing a renewable energy industry and markets including technology, supportive infrastructure, financing mechanisms. It should use market-based instruments such as renewable portfolio standards, green pricing, feed-in tariffs, net metering, and tradable renewable energy certificates.

Heng Pheakdey is founder of the Center for Green Growth of Enrich Institute, a Phnom Penh-based policy and research organization working to promote green growth and sustainable development. – Khmer Times