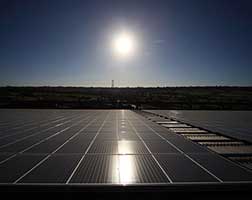 Energy experts believe a rumoured government plan to cut subsidies to solar could cripple the burgeoning industry just before it is able to stand on its own.

Late last week the government issued ambiguous warnings that the solar industry’s days of living off top-ups from bill-payers were numbered. A cabinet source revealed to the BBC that the government view had hardened further towards green subsidies and a “big reset” was coming.

After onshore wind (currently the cheapest renewable energy in the country) had its subsidies cut last month, solar looks set to be next on the chopping block. Solar insiders believe the feed-in tariff (FiT), levied from household bills and given to those who buy rooftop panels for their homes, will be severely restricted or abolished.

Last week, a source at the Department for Energy and Climate Change (Decc) told the Telegraph: “[Energy secretary Amber Rudd] is determined to get a grip of these out-of-control subsidies and make sure that hardworking billpayers are getting a fair deal.” Decc did not respond to a request to clarify or confirm the comments.

Subsidies are not limited to renewable energy. Globally, the International Monetary Fund estimates that fossil fuels benefits fromdirect and indirect subsidies amounting to £3.4tn a year.

The actual amount subsidies for renewable energy is often wildly overestimated by people paying the bills. A study in March showed people on average estimate that £259 of a typical duel-fuel bill goes in subsidies for wind energy. The correct figure is £18.

Recent research by the Policy Exchange thinktank found the contribution of FiTs and the renewable obligation (RO) amounted to £10 and £38 respectively. Jim Watson, the director of the UK Energy Research Centre said the contribution of solar to the RO was “relatively small” whereas the industry benefits from the vast majority of FiTs.

The average UK gas and electricity bill is £1,338 per year

He said if this money were to disappear completely the government risked the industry “dropping off a cliff”.

“Were subsidies to simply stop I think activity would probably fall off very significantly,” he said.

The competitiveness of any source of electricity is based on its wholesale price. Renewable subsidies allow solar, wind and other clean technolgies to compete with carbon intensive fuels like coal and gas. The current price of solar is roughly £80/MWhr, whereas fossil fuels sell to the grid at £50/MWhr.

“Eventually you’d want the to stand on their own two feet and not have subsidies,” says Watson. “ The point I’d make with solar is that costs have been reducing very rapidly. It’s not yet at that point where it can stand on its own two feet, but any government should expect that point to be within about five years.

“So the question is do you withdraw support now and risk it dropping off a cliff. Or do you maintain the support, albeit at a reducing rate for the next few years and give it that chance to demonstrate it can be competitive.”

Green energy subsidies are controlled by the levy control framework (LCF), which is a cap on the amount the government can spend from bills for these initiatives. But the amount spent is tricky for the government to control as it is driven by demand. This year the LCF looks set to exceed its budgetary limit of £4.3b, although it will remain within a 20% ‘headroom’. Policy Exchange found that without significant policy alterations, the LCF will continue to breach the rising cap every year until it expires in 2021.

The largest contributor to overspending has been the underestimation of the uptake of rooftop solar panels. Britain has added more solar capacity than any other European country since the turn of the century and the industry set a record this month by supplying 15% of the country’s power during a recent heatwave. Policy Exchange found that this year the tariffs to support home panel kits could cost £180m more than budgeted for. The thinktank suggested restricting FiTs for small photovoltaic systems from around 13p/kWh to 5p/kWh.

“The current feed in tariffs are far too generous, and could withstand a substantial cut without halting deployment of solar PV,” the report argues.

The Solar Trade Association’s (STA) Leonie Greene said their modelling showed more than 80% of the overspend on FiTs was the legacy of the government’s massive underestimate of solar uptake in the early days of the LCF, which lead the government to slash FiTs by half in 2011. Notably at that time, the industry warned the move would “kill the UK solar industry stone dead” and yet it has not only endured but thrived.

The industry believes it is too early for solar to go it alone, but not by a lot. STA has produced a plan that would see the industry off subsidies by 2020. This would involve slowly reducing FiTs over time.

“I think it’s obvious what’s needed which is just a sensible, structured plan over the next few years to get us off subsidy. It’s very odd to pull up the bridge just as you’re about to cross the divide. I think it will be very damaging, we’re not there yet,” said Greene.

“I keep hearing that we are subsidy junkies, it’s not true. The industry wants to be off subsidies as soon as possible.”

Friends of the Earth renewable campaigner Alasdair Cameron said he was in the process of installing solar panels on his roof.

“While costs have fallen very dramatically, there is still a need for a feed-in tariff. Lowering the FiT to 5p/kWh as suggested by Policy Exchange would increase the payback period of the panels from about 10 years, to 23 years. Even 10 years is quite long, far from the huge instant returns the government talks about,” he said.

Watson said the targeting of cheap solar was nonsensical for a government bound by law to produce 15% of its energy from renewable sources by 2020.

“If you are interested in meeting climate targets at lowest overall cost, you’d be interested in promoting those technolgies which are cheaper. There is a conflict with the overall aim of keeping cost down for consumers,” he said.

“That’s exactly why we do want to be off subsidies. There’s a lot of people that just cannot wait. But you have to be realistic about the economics and about the point at which you really are at cost competitiveness and the reality is we are not there yet. We are very close, about three quarters of the way and we just need that last little push.”