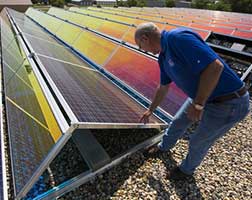 PAYNESVILLE – On a sunny July day, rows of solar panels soak up the sun’s rays atop the Louis Industries factory here — and produce none of their promised electricity.

Leo Louis, CEO of the family-owned manufacturing company, said in an interview that up to US$9,000 in solar power is wasted each month. Meanwhile, the company pays about US$15,000 monthly to Xcel for electricity, he said.

“It is a program of delay from higher up,” Louis said of the Minneapolis-based power company.

Xcel adamantly denied intentionally delaying the hookup. Instead, the utility blames a solar installer for not planning ahead for the complexities of the US$900,000 project.

Staff members of the Minnesota Commerce Department and the Minnesota Public Utilities Commission (PUC) met recently to discuss delays in the Paynesville and other solar projects, but it’s unclear whether regulators are preparing to investigate. Louis Industries has not asked for a PUC inquiry.

Louis Industries’ CEO Leo Louis blames Xcel Energy for “a program of delay from higher up.”

Louis Industries’ CEO Leo Louis blames Xcel Energy for “a program of delay from higher up.”
“We have heard many problems about the utilities’ significant delays and lack of cooperation in connecting solar projects to the grid,” Commerce Commissioner Mike Rothman said in a statement e-mailed to the Star Tribune. “ … Minnesota has made a commitment to solar development as an important state priority for our economy, energy future and environment. Unnecessary delays must not hinder our state’s progress in solar development.”

Solar advocates have long accused the utility industry of resisting customer-generated solar power with fees, restrictive policies and delays. But Xcel insists that’s not what has happened with the solar array in Paynesville, a community 85 miles northwest of the Twin Cities.

“We are supporting customer choices around generation,” Lee Gabler, Xcel’s senior director of customer strategy and solutions, said in an interview. “We have had a number of projects that have gone through without the issues this customer has faced.”

Louis Industries, a contract metal fabricator with 50 employees, invested in rooftop solar panels partly because the owners believe in reducing greenhouse gases that cause climate change.

“We have to do this,” Leo Louis said. “For my grandkids, it is not going to be the same world.”

The company also saw opportunity. The cost of solar panels has dropped significantly, and the company expects the system to be paid off in five or six years. Since the panels last at least 25 years, the company will get two more decades of free electricity.

“Our customers are excited about this,” Lance Louis said.

The connection will allow Louis Industries to feed electricity back to Xcel, such as when the factory isn’t running on weekends and holidays. Jacobson said he expected Xcel’s engineering review to take several months, and he has been surprised that it has gone on so long.

But Xcel’s Gabler said the process “started off a little bit backward” because the solar array was being built before the utility could examine the plans. He said the size of the system made it more complex, resulting in considerable back-and-forth communication between the utility engineers and the installer.

If the plan had been submitted six months before construction, he said, the engineering issues could have been resolved earlier. The after-the-fact review made the process take even longer, he added.

“Connecting a solar array to the grid isn’t as simple as plugging your cellphone into a power supply,” Gabler said in a follow-up e-mail. “These interconnections are complex engineering challenges and can impact the stability and reliability of the grid that all of our customers rely on every day.”

Gabler added that delays in Louis Industries’ solar project are not related to pressures on Xcel to review hundreds of even-larger community solar gardens proposed by other energy companies. He said those reviews are done by engineers in another Xcel unit.

Missed out on summer

For the Louis Industries project, Xcel said it is waiting for a special-order transformer that needs to be installed outside the factory to handle the solar array. The final design work on that upgrade should be done in another three or four weeks, Gabler said.

But Louis, the CEO, said he still doesn’t understand why his solar project couldn’t have been hooked up in time for the long days of summer.

In one example of the back and forth with Xcel, Louis said he wrote the utility a check in May for US$107,000 to cover its costs for the hookup. He said Xcel replied a couple of weeks later that he had neglected to sign a related work order. Xcel says it didn’t get the signed paperwork until July.

Jacobson, the solar installer, said he’s willing to submit plans to Xcel earlier on future large solar projects, and he offered to work with the company to streamline the process. Even so, he still blames Xcel for a slow pace on the Louis Industries review and the utility’s heavy reliance on e-mail.

“If their process could include engineers sitting around a table, we could accomplish in one three-hour meeting what takes a month and a half by e-mails,” he added. – Star Tribune