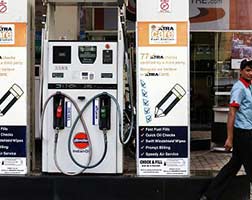 India’s economy is on a tear at the moment and, if the International Monetary Fund (IMF)’s forecasts are correct, the country could grow faster than China next year. But could one of the factors helping growth—commodity prices—spoil India’s ride?

A combination of low commodity prices, strong demographics and new leadership in government and the central bank mean India is set to grow by 7-8 % annually for the next 10 years, according to Anand Shah, chief investment officer of BNP Paribas Investment Partners India. This could see the country become the world’s third-biggest economy by around 2030 and the second-largest by 2040.

“The macroeconomy has never been better in India,” Mumbai-based Shah said on Tuesday, ahead of a client conference in London.

Optimism for the country’s fortunes has increased since the election of Narendra Modi, who has pledged to decrease unemployment, upgrade infrastructure and combat government inefficiency and corruption.

“It’s very popular with international investors; domestic investors are feeling very enthusiastic about it as well. Inflation is down, which is critical for them and they have a new government that has a mandate for change.”

What could go wrong?

As a net commodities importer, India is vulnerable to an upturn in oil prices. The country brings in around 70 % of its oil consumption—worth 5.5 % of its gross domestic product (GDP), according to BNP Paribas—and is also a heavy buyer of coal, iron and palm oil.

Shah said that India had “survived” between 2011 and mid-2014 when oil was priced at $100 per barrel, albeit with “some fiscal concerns.”

He added that crude prices were not forecast to rise back above $70 in the short-term.

“Rising crude oil prices might spoil the ride (in India’s economic growth) for a year (but not longer),” he said.

So is India the new China? Some investors are unconvinced, and even Shah said there was little chance of India damaging China’s prospects of growing to be the world’s biggest economy by 2020.

“China would have to do something wrong and that would probably hurt India,” he said.

Jonathan Brodsky of Advisory Research remained in the China camp.

“We think the slowdown in growth within China is actually going to be productive in the long-run. So if you have three-to-five-year time horizon, we think Chinese-orientated securities have limited downside and lots of upside opportunity,” he said.