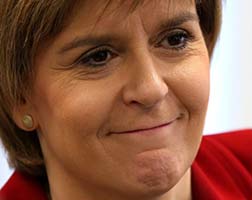 Scotland could become far more dependent on UK taxpayers as a sharp drop in oil prices threatens to deepen its public spending deficit, the Institute for Fiscal Studies has warned.

The IFS said the latest official data on North Sea oil revenues suggested that Scotland could be £6.6bn worse off next year after oil prices fell to $50 (£33) a barrel, and it faced a deficit twice that of projections for the UK.

The thinktank’s forecasts come after official Scottish government data, published in its annual government expenditure and revenue Scotland report, showed that Scotland’s financial deficit was 40% higher than the UK’s as a whole last year.

Even if a geographical share of North Sea oil receipts were included, falling tax revenues helped push Scotland’s overall deficit for 2013/14 to £12.4bn, the report said. Excluding North Sea oil, Scotland’s onshore deficit was far higher at £16.4bn, or 12.2% of the country’s GDP.

The figures provoked a fresh row about Scotland’s economic future in the runup to the general election, after the IFS forecast that Scotland’s deficit would be 8.6% of GDP in the current financial year, compared to 5% for the UK, and fall slightly to 8% next year while the UK’s deficit dropped faster to 4%.

Opposition parties insisted the data raised profound doubts about the affordability of the Scottish National party’s (SNP) quest for full fiscal autonomy, a system short of full independence where Scotland collects all its taxes and funds all its services, while paying a share of the UK’s defence, foreign and overseas aid budgets.

David Phillips, a senior IFS economist, warned that such a policy would be much more economically challenging because oil prices had a disproportionate impact on Scottish tax revenues compared to the much larger UK economy. In cash terms, Scotland’s deficit next year would be around £2,600 per person, more than double the UK’s as a whole at £1,200 per head.

He said: “Today’s figures illustrate that full fiscal autonomy would likely involve substantial spending cuts or tax rises in Scotland – unless oil revenues rebound and remain at consistently high levels, or credible policies to boost the growth of Scotland’s onshore economies and revenues can be developed.”

Nicola Sturgeon, the first minister and SNP leader, said full fiscal autonomy would give the Scottish government control over taxation and allow it to tailor policy and spending to expand the economy.

Pointing out that the Conservative plans would cut £14.5bn off Scottish spending over the next parliament, she said: “The fundamentals of our economy are strong. Scotland is, and will continue to be, a very wealthy country. We have the capacity and the resources to grow our economy, address inequalities, grow small businesses and put more people back to work.”

Yet confronted with the worsening economic data, Sturgeon said her government now wanted to phase in full fiscal autonomy over an unspecified time period while keeping the Treasury’s block grant to protect public spending levels through that process.

Alistair Carmichael, the UK government’s Scotland secretary, said the data was “concrete proof that Scotland’s public spending is protected and receives secure and stable levels of funding, alongside the ability to absorb economic shocks more effectively.

“These figures are based on a high oil price of over $100 (£67) rather than the current price, emphasising the need for us to pool our risk and resources in the future.”

“It’s a cruel irony that after years of claiming that they alone stand up for Scotland, the SNP’s own figures have exposed the fact their plan for full fiscal autonomy would impose austerity-max on our country.”

The IFS said the official forecasts due to be released by the Office for Budget Responsibility alongside next week’s budget were likely to be worse than the current OBR forecasts, which were based on an oil price of $70 (£47) a barrel and a forecast price next year of $83 (£56) a barrel.

“Since then, the oil price has fallen further, and futures markets currently have an average price of around $60 (£40) a barrel for oil to be delivered during 2015–16,” Phillips said. If those figures were used by the OBR next Wednesday, that would cut a further 0.3% off Scotland’s GDP.