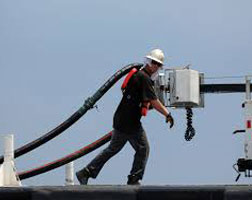 Canadian energy producers are giving up hoping for a big rebound in oil prices, preparing instead to embark on a course of belated hedging if crude prices edge just a few dollars higher.

As crude markets collapsed during the first half of this year, Canada’s oil producers held back on hedging on concern they would lock in prices at barely break-even rates.

That may be about to change. A rally in U.S. crude from US$60 a barrel today to about US$65 could trigger a wave of selling from Canadian companies eager to build up protection against a second price slump, according to market sources in Calgary. Many allowed their hedging activity to lapse since last year, when oil tumbled to a six-year low near US$42 a barrel.

Canadian producers are between 10 % and 20 % underhedged compared with the same time last year, banking sources in Canada’s oil capital estimated. For example, Canadian Natural Resources Ltd had hedged around 10 % of its production by early May; a year earlier it had already hedged more than half its output.

It was not immediately clear which Canadian companies were gearing up for more hedging. Dozens of them routinely use derivatives contracts such as swaps or options to provide a guaranteed price on future oil production, often to appease lenders who want secure cash flow.

Some firms may also hedge simply because they fear oil prices may fall further, potentially dropping below the cost of production in the energy-intensive oil sands, where per-barrel operating costs can top US$35, according to consultancy Wood Mackenzie.

“A lot of guys are saying we don’t want to hedge at the bottom of a commodity cycle so there’s been some hesitation,” said Jeremy McCrea, an analyst at AltaCorp Capital in Calgary. “Clearly everyone is wishing they had hedged last year more.”

McCrea said a number of producers were looking to hedge at around C$80 (US$65) oil, and that less than half the oil companies covered by his research team have a structured hedging policy, preferring to add protection when needed.

One source at a major bank said at least one client has put in orders to transact on their behalf as soon as crude hits US$65 a barrel. Another source at a separate bank said clients were holding off for levels closer to US$65 before hedging for 2016.

David Leben, a director in oil products trading with BNP Paribas’ in New York, said some producers were looking for even higher levels, around US$70 to US$80 per barrel.

That strategy has its risks, however. Global crude supply is still robust and if demand falters prices could slide again, leaving producers exposed before they have a chance to hedge.

“Some large Canadian producers have taken the stance that they will do nothing until we reach higher levels,” Leben said.

Since oil prices started tumbling last June, producers have been reluctant to put on hedges in case a sudden recovery meant they missed out on potential hefty profits.

But with crude trading between US$57 and US$62 a barrel since early May, many companies have accepted a return to over US$100 a barrel is unlikely.

Greater insurance could frustrate producer-group OPEC’s aim of putting the brakes on North American crude output, part of the battle for global market share that saw oil prices more than halve over just a few months.

There’s a long way to go. As of May 6, Canadian Natural, the country’s No. 1 independent crude producer and until recently one of the largest hedgers in Alberta, had only hedged about 50,000 barrels a day of production for the remainder of 2015, using price collars between US$80-US$120.54 Brent, according to quarterly earnings statements.

At the same time last year Canadian Natural had hedged approximately 297,000 bpd of forecasted 2014 crude oil volumes, more than half its production.

Heavy oil producer Baytex Energy Corp hedged about 62 % of its West Texas Intermediate crude exposure at a weighted average price of US$99.47/bbl for the second quarter of 2014, but had only 33 % of volumes hedged for the same period in 2015, mostly at a fixed price of US$87.03 WTI.

Baytex did not immediately respond to a request for comment.

Many of the biggest oil sands producers such as Suncor Energy Inc and Husky Energy Inc do not hedge at all because their integrated refinery operations benefit from low crude oil prices.