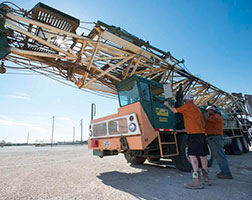 WEATHERFORD, Texas (Reuters) – Oil field work was coming in fast when GoFrac doubled its workforce and equipment fleet at the beginning of last year, just one of hundreds of small oil service companies thriving on the revival of U.S. drilling.

Founded in November 2011 with a loan of around $35 million, the Fort Worth, Texas-based company was by 2014 making nearly that much in monthly revenues, providing the crews and machinery needed by companies including ExxonMobil to frack oil and gas wells from North Dakota to Texas.

Executives flew to meetings across the country in a Falcon 50 private jet, and entertained customers at their suite at the Texas Rangers baseball stadium in Arlington. The firm would soon move into a 22,000-square-foot office on the 12th floor of Burnett Plaza, one of Fort Worth’s most prestigious office buildings.

Eighteen months on, however, without work and unable to meet monthly loan payments, GoFrac has closed its doors, its ambitions gutted by a steep dive in oil prices. Of the 550-odd employees on the payroll at the beginning of this year, only six remain.

At GoFrac’s only remaining outpost, a small warehouse and 40-acre gravel yard in Weatherford, 30 miles west of Fort Worth, its huge fleet of sand haulers, chemical blenders and pressure pumps that months before were being used to frack U.S. oil and gas wells, sit idle in long rows, waiting to be sold.

“We knew it was going to be rough, but nobody foresaw what was coming,” said GoFrac chief financial officer Kevin McGlinch, who was hired in November 2014 to see GoFrac through the slowdown.

GoFrac’s end mirrored its beginning: steeper and faster than expected and driven by the unpredictable forces of international oil markets. U.S. oil prices dropped 60 percent from June to January due to oversupply from U.S. shale deposits, putting an end to the oil drilling boom and precipitating the sharpest industry downturn in a generation.

The company’s story, recounted to Reuters by six current and former executives and employees, is not an isolated one.

The small- and medium-sized firms that make up at least half of the nearly $100 billion a year U.S. oil services industry that provides fracking sand and specialized chemicals for fracking have been hit far harder than their large, cash-rich rivals by the downturn, experts say.

While giants like Halliburton, Baker Hughes and Schlumberger are weathering the slump by cutting tens of thousands of jobs, firms like GoFrac are going under or heading that way, starved of cash and unable to raise emergency investment.

Halliburton and Baker Hughes, the second and third largest oil service companies globally after Schlumberger, announced in November that they were in talks to merge, creating a $67 billion company. The joined entity would still be smaller than Schlumberger, whose market capitalization is $125 billion.

Even as oil prices rebound, and analysts expect production to grow again in 2016, the demise of the service sector raises questions about the U.S. oil industry’s ability to speed up again if prices rise further.

“You may start to run into equipment and labor issues.”

Founded by private equity groups The Crawford Group and Soave Enterprises, and oil veteran Frank Autry, GoFrac started work in November 2011. Richard Crawford, founder of The Crawford Group, is GoFrac’s chief executive officer. He declined to comment for this article.

Oil was $98 a barrel that day, high enough to fuel a drilling frenzy in Texas and beyond that would last for three more years.

“We were very successful when we started,” said Autry, an oil industry veteran who stepped down as chief operating officer in September last year but who keeps a copy of the company’s first invoice, a frack job for Oxxon Mobil’s XTO Energy on November 17 2011.

The first sign of trouble came around early summer of 2014 with a rare monthly loss, according to two former employees who saw company statements. At almost the same time, in June, oil prices hit a peak of $107 before falling for seven straight months.

By Thanksgiving Day, as Saudi Arabia and its OPEC allies shocked the oil market by announcing that they would maintain production despite a growing glut, GoFrac was sending crews across the country to carry out what work it could. Time in the field increased as workers went further afield for jobs.

As prices nosedived, GoFrac found itself undercut by larger companies offering up to 20 percent lower costs for their services.

“Some of the larger players were awarded the work for a price that we couldn’t even cover the cost of the sand alone,” said GoFrac CFO McGlinch.

By the beginning of February, with its workforce eroded by two rounds of layoffs, GoFrac brought its equipment in from the field and halted operations.

It owes debts across the board, from $3 million to New York-based Icon Investments for leased equipment, to $60,000 to Great White Washing, a local outfit that pressure cleaned GoFrac’s equipment.

While most large public energy companies have been kept afloat with loans this year, lower-profile private companies are struggling to survive.

Frac Specialists, a Midland, Texas-based company with 280 employees, filed for bankruptcy on May 17. Like GoFrac, Frac Specialists’ rise was meteoric. Revenues, $17.1 million in 2011, jumped to $204.1 million in 2014. Then the work dried up; the number of rigs drilling for oil in the United States has fallen for the last 27 weeks, down to a five-year low of 635 last week from an all time peak of 1,609 in October 2014, according to a weekly survey from Baker Hughes.

Other companies are struggling to meet loan payments and are fast approaching bankruptcy, lenders said.

“There has been an amazing fallout,” said Eric Freeman, vice president at Summit Funding Group, which arranged a $43-million loan for GoFrac but which plans no more investment in energy firms.

“I have never seen anything like it,” he said.

Meanwhile, for GoFrac’s remaining employees, the job is to find a buyer for its hundreds of pieces of equipment.

In an auction in nearby Odessa on May 13, about a dozen pieces of GoFrac machinery were put up for sale. Bought 18 months ago for about $12.5 million, they were valued that day at $10 million.

Bids at the auction were slow, however, despite attempts by the auctioneer to coax the price higher.