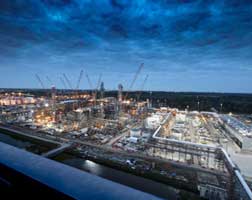 Chevron Phillips Chemical Company LP (Chevron Phillips Chemical) says that its world-scale ethane cracker at Cedar Bayou in Baytown, Texas, has successfully achieved the major milestone of mechanical completion. The unit is now undergoing a series of rigorous commissioning activities, system checks and final certifications to ensure a safe and reliable start-up, and consistent, on-spec production. Once operational, the unit is expected to produce at least 1.5 million tonnes/year of product. At peak construction, approximately 5,000 workers were employed on this project, helping to spawn additional economic activity across the region.

The new ethane cracker will cater to the company’s ethylene business and feedstock for its ethylene derivatives businesses. The polyethylene (PE) fleet now includes the two new PE units at Old Ocean, Texas, which were also part of the US. Gulf Coast petrochemical project. These units started up in September 2017 and play a critical role in Chevron Phillips Chemical’s strategic expansion to meet the growing global demand for PE. These units can produce a wide variety of high quality Marlex polyethylene resins ranging from metallocene LLDPE film to bi-modal film and pipe products, displaying the wide capability of Chevron Phillips chemical Company’s proprietary MarTech technology.

In addition to the cracker and PE units, the company has purchased nearly 3,000 newly built rail cars and constructed a storage-in-transition facility to ship polyethylene via rail to customers both domestically and to ports for export around the globe.

In other news, Taiwan’s Formosa Plastics will expand its PVC production at its facility in Baton Rouge, Louisiana. The production expansion will increase production capacity by around 136,000 tonnes/year 300 million and is expected to start up in 2020.

Investment cost information and other technical/operational details are not available for release at this time, said the company in a statement. This continues the company’s long-term commitment to investing in the US.

Formosa Plastics Corporation USA is a vertically integrated producer of plastic resins and chemicals. Its PE and PP resins are marketed under the Formolene trade name; its PVC resins are marketed under the Formolon trade name. The company is headquartered in Livingston, NJ, has over 2,400 employees and is certified to the ISO 9001 quality management system and the ISO 14001 environmental management system.