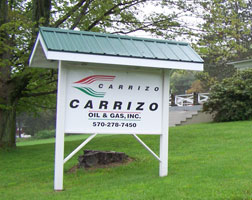 Carrizo Oil & Gas, Inc, is an energy company. The Company is actively engaged in the exploration, development, and production of oil and gas primarily from resource plays located in the United States. As of December 31, 2013 the Company’s operations are principally focused in producing oil and gas plays primarily in the Eagle Ford Shale in South Texas, the Niobrara Formation in Colorado, the Marcellus Shale in Pennsylvania, and the Utica Shale in Ohio.