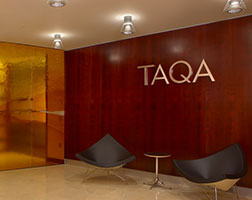 ABU DHABI — Abu Dhabi National Energy Company, or Taqa’s revenues from oil and gas plunged 47 % to Dh1.852 billion in the first quarter of the year. A decrease of Dh1.654 billion reflects the impact the lowering oil and gas prices have on Taqa revenues.

The break-up of Dh1.852 billion shows that weaker oil prices contributed Dh1.3 billion and Dh370 impact came from lower gas prices. Oil prices have tumbled from last June’s peak of US$115 a barrel to US$67.52 a barrel on Wednesday May 13, showing a decline of 41.65 %.

However, total revenues declined 29 % to Dh5.1 billion and net profit dropped seven % to Dh256 million compared to the same period a year ago.

The effect of declining revenues on net profit was almost fully offset by the one-off benefit of the UK North Sea tax rate changes which resulted in a credit of Dh553 million, Taqa said in a regulatory filing to Abu Dhabi Securities Exchange.

“Today’s results demonstrate the value of our diversified portfolio in a lower oil and gas price environment,” said Edward LaFehr, Taqa chief operating officer. “Continued strong safety and operating performance combined with the significant savings delivered by our cost transformation initiatives are helping to mitigate the effects of the challenging market conditions.”

“Taqa’s cost transformation programme is progressing well and is on track to deliver considerable cash cost savings,” the energy company said. This can be seen in the decline in the administrative costs in comparison to the first quarter of 2014 and some of the operating expense reductions.

The energy company is expected to reduce operating and general and administrative expenses by Dh1.5 billion annually by the end of 2016.