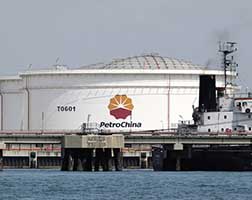 There are many reasons why China’s biggest oil companies should be dusting off their files on acquisition targets: cheap oil, the beginnings of global consolidation, and the nation’s rising crude consumption among them.

If it’s not at the top of the priority list, it’s because state-owned giants such as PetroChina Co. and Sinopec have their hands full. Weathering government corruption probes and its plans to remake the public sector are bigger considerations for the year ahead.

Amid speculation that Royal Dutch Shell Plc’s purchase of BG Group Plc will spur a round of mega deals, China could find itself on the margins, swapping assets or buying smaller companies rather than bidding for the majors. That could prove a lost opportunity for the world’s most energy-hungry nation, as its reserves decline and import needs are forecast to rise to two-thirds of consumption by the end of the decade.

PetroChina’s president, Wang Dongjin, said in March that the company is looking at many businesses overseas, although its ambition could be limited to asset swaps to reduce transaction costs.

That thinking hasn’t changed after the Shell-BG announcement earlier this month. Buying large global rivals would be politically difficult and suck up too many resources, according to a company official who asked not to be named as the information isn’t public. Instead, China’s biggest oil and gas producer is seeking individual assets that can give immediate returns, the person said.

Shell’s US$70 billion BG purchase will create a company twice the size of BP Plc by market value. The deal recalls a wave of acquisitions a decade-and-a-half ago that launched today’s so-called super majors. PetroChina, meanwhile, is on a par with Exxon Mobil Corp. as the world’s largest oil firm.

“If Chinese oil companies don’t find a way to buy quality companies such as BP quickly, someone else such as Exxon Mobil may,” said Gordon Kwan, Hong Kong-based head of regional oil and gas research at Nomura. “High quality assets only become available once in a while and it may take another decade for similar opportunities to emerge again.”

For PetroChina, the overhang of a sweeping corruption probe that has snared more than a dozen top executives since 2013 is a distraction. The most senior, former Chairman Jiang Jiemin, pleaded guilty last week for accepting bribes.

“Obviously, the decision making process slows down a bit given what happened to the anti-corruption investigation,” said Neil Beveridge, a Hong Kong-based analyst at Sanford C. Bernstein. “PetroChina has to buy new assets internationally to improve its reserves in the longer term, but it may not react to the market trend as quickly as many would expect.”

Jiang presided over PetroChina’s buying spree from 2009 through 2012 that saw the company involved in US$15.3 billion of announced acquisitions from Australia to North America, according to data compiled by Bloomberg. The last two years have seen a slowdown with a disclosed spend of just US$1.1 billion on a remaining stake in Athabasca Oil Corp.’s Canadian oil sands project.

Sinopec, which has been less affected by China’s anti-graft campaign, is waiting for better valuations, Chairman Fu Chengyu said last month. If oil prices stay low, the time will come when companies are forced into fire sales to stay afloat, he said.

A Beijing-based spokesman for the company, who asked not to be named because of company rules, said Fu’s comments still stand as guidance for the company’s acquisition strategy. Brent, a benchmark for half the world’s crude, has dropped 43 % in the past year.

The two companies and their parents are among those center stage of China’s overhaul of its state-owned sector to allow more private investment. Sinopec last year brought in 25 outside investors as shareholders in its fuel retail unit, while PetroChina opened up some oil and gas fields in a western province for joint ventures with local companies.

It’s now looking at assets that can provide a high return for low risk, Chairman Wang Yilin in March.

The company is still digesting Nexen and is focused on cutting costs in the face of slumping crude prices, said a company official, who also asked not to be named. Cnooc is unlikely to acquire sizable overseas assets at the moment, the person said. – Bloomberg.com