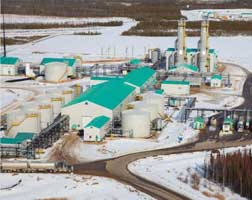 The Calgary-based oilsands developer was seeking approval to swap US$1 billion of bonds for equity and to issue US$35 million of convertible notes under a plan that was contested by lenders. The Court of Queen’s Bench on Thursday dismissed the recapitalization plan that shareholders had approved days earlier, the company said.

Credit Suisse Group, an agent to unidentified lenders, sued to disrupt the deal in New York state, saying the Alberta court couldn’t rule on the issue because Connacher defaulted on a US$128-million loan, which is a more senior form of debt.

In a statement, Connacher said it’s assessing its options and continues to work to address its liquidity and capital structure. Alternatives could include the sale of all or a portion of its assets, it said, warning there is no guarantee of a deal or the terms and timing of any transaction.

The company started a review to fix its balance sheet in December and the following month hired financial advisers to consider a sale of some or all of its assets. Without a new source of capital, Connacher would have a tough time staying in business if it was forced to repay the US$128-million loan, analysts have said.

Shareholders earlier this week voted more than 96 per cent in favour of the recapitalization plan that would have left them with only two per cent of the equity.

Connacher president and CEO Chris Bloomer said after Monday’s vote that shareholders recognized drastic action was needed to get out from under net debt that has grown to US$1.2 billion. “To be frank, I don’t think anybody’s been happy with the situation for a long time,” he said.

Connacher last week reported a US$99-million fourth-quarter net loss despite record production. Its shares peaked at nearly US$6 in 2006 but have most recently traded for two or three cents.

Peters & Co., in a report following the company’s fourth-quarter earnings results, said Connacher’s financial position remains precarious even if the recapitalization is completed, noting it will still need to raise capital to make its operations sustainable. – Calgary Herald