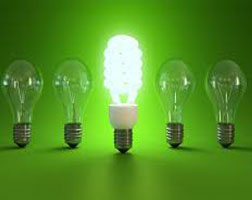 Congress on Tuesday passed a bill focused on improving energy efficiency in buildings and water heaters, a move celebrated by both parties for breaking longstanding partisan gridlock.

The bill, which President Obama is expected to sign into law this week, is a modest one. But its authors, Senator Rob Portman, Republican of Ohio, and Senator Jeanne Shaheen, Democrat of New Hampshire, who had worked together for years on more ambitious energy-saving legislation, called it a significant victory.

“On the bill’s merits — creating jobs, saving consumers money and reducing pollution — it was never a hard sell,” Ms. Shaheen said. “The tough part was convincing Washington to not play politics with a good idea.”

Mr. Portman said, “Our targeted energy efficiency bill has garnered widespread support because of a simple fact: It is good for the economy and good for the environment.”

The two senators have been working together since 2011 on their broader energy efficiency measure. That bill, which also has bipartisan support, would create incentives for federal mortgage writers to incorporate energy-efficient heating and cooling systems into the value of a home, establish training programs in energy-efficiency construction, create programs to increase the energy efficiency of manufacturing supply chains, and direct the Energy Department to work with manufacturers on energy-efficient technology.

But efforts to bring the bill to the Senate floor have been thwarted by partisan debates over issues like climate change and the Keystone XL oil pipeline.

This year, the senators introduced a bill that incorporated a few elements of the broader measure. The narrower bill would create a voluntary program for landlords and tenants to improve energy efficiency in commercial buildings, mandate that large electric water heaters be run in a highly energy-efficient manner and require federal agencies to perform energy-use assessments on commercial buildings that they lease.

That measure was passed by a voice vote at 4 a.m. on March 27, at the end of an all-night voting session on amendments to a budget bill. The House then passed a companion bill on Tuesday, also by a voice vote. – NYT