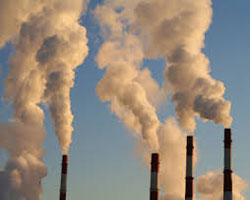 WASHINGTON – The United States saw a rise in the production of greenhouse gases for the last two years in a row.

A new report from the U.S. Energy Information Administration found an increase of energy-related CO2 emissions in 2014, but it was less of an increase than what was reported for 2013. Gross domestic product (GDP) and emissions increased at roughly the same rate in 2013, 2.5 % for emissions and 2.2 % for GDP. In 2014, emissions only increased 0.7 %, but GDP increased 2.4 %.

The findings show the United States still has progress to make if it wants to lower emissions, as President Obama has expressed interest in doing, but the country might be on its way there.

The administration estimates emissions were 5,404 million metric tons of CO2 from energy-related sources in 2014.