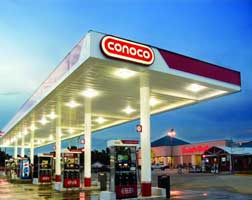 U.S. company ConocoPhillips plans to invest around US$2.5 billion in Indonesia’s upstream oil and gas industry over the next three or four years, the nation’s energy minister said on Tuesday.

That would roughly match its investment in the sector over the preceding four years, Sudirman Said told reporters following a meeting between the chief executive of the oil major and the president of Southeast Asia’s largest economy, Joko Widodo.

“They are an important partner for Indonesia (and) they have committed to continue their investment here,” Said said.

Former OPEC member Indonesia has been hit hard by falling oil production, insufficient gas infrastructure and a series of corruption scandals that led to the downfall of top energy officials.

While it is still one of the world’s top exporters of natural gas and Southeast Asia’s top crude producer, Indonesia is also a major fuel importer, the main driver behind the country’s fiscal and current account deficits.

“With our investment in energy today, we’ve very large pipeline gas producers here in Indonesia and we look forward to continuing our investment in this country,” ConocoPhillips CEO Ryan Lance told reporters on Tuesday.

“(The president) is working to make sure the ministers and his office to reduce uncertainty that we have in this business to continue to make investments.”

ConocoPhillips’ contract to operate the Natuna Sea Block B is due to expire in 2020, Lance said. He did not say how much the firm, the second-biggest producer of gas in Indonesia, planned to invest in the next few years.

Operating two oil and gas blocks in Indonesia – Natuna and the Corridor Block in South Sumatra – ConocoPhillips currently contributes more than 20 % of Indonesia’s natural gas production, 24 % of its liquefied petroleum gas (LPG) output and 6-7 % of its crude oil production, according to Said.

Based on data from Indonesia’s oil and gas regulator (SKKMigas), the firm aims to produce 956 billion British thermal units per day (bbtud) of gas and 20,500 barrels of oil per day from the Corridor block, and 335 bbtud of natural gas from Natuna.