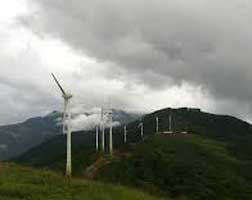 There are a lot of things to love about Costa Rica. It has great weather, tremendous biodiversity, no army, and top-notch education and health care.

Now, the tropical paradise is also even greener than ever. According to the state-run Costa Rican Electricity Institute (ICE), the country has produced 100 % of its electricity without fossil fuelsfor the first 75 days of 2015. Wind, solar and biomass got a strong boost from hydropower, which benefited from heavy rains.

This burst of clean energy has led to a lowering of electric rates by 12 %. ICE predicts that rates will continue to fall into the second quarter.

The country is also a leader in low energy prices. The average Costa Rican requires just 7 % of the minimum salary to pay for energy, compared with the Latin American average of 14.6 %.

The government announced in 2009 that it had set a goal of becoming carbon neutral by 2021. The nation already gets an average of 88 % of its energy from renewables — a number that seems likely to go up soon.

The mix relies heavily on hydropower (68 %) and geothermal (15 %), which should not be surprising for a land set out among volcanoes and rain forests.

The heavy reliance on rainfall for power generation does make the country susceptible to climate-related disruptions, such as shifting rainfall patterns.

That’s why the Costa Rican legislature approved a US$958 million geothermal project last year to help reduce the country’s dependence on hydropower.

Four plants with a total capacity of 210MW will be erected in the region near the Rincón de la Vieja volcano in Guanacaste. The plants are expected to produce power at five cents per kilo-watt hour.

Costa Rica, with its population of 4.8 million, has taken a leading role in preserving its natural resources, which has led to a shift towards ecotourism as a major source of revenue.

A total of 124 national parks, nature reserves and wildlife refuges cover as much as 25 % of a country that once seriously was threatened by deforestation.

As much as 80 % of the rainforest has disappeared since WWII, mostly to make room for cattle ranching. A number of initiatives in place today emphasize sustainable use of the remaining forests.

While Costa Rica certainly deserves recognition for all that it has accomplished, one tiny nation is slightly ahead of it, at least in terms of renewable energy. That would be the Dutch island ofBonaire, off the coast of Venezuela.

Bonaire, with its year-round population of 14,500 people — supplemented by 70,000 annual tourist visitors — is tiny by any measure. Its peak electrical demand is a mere 11 megawatts.

But when that power was provided by diesel plants, driven by fuel that had to be shipped in, it was not only dirty, but expensive.

After a fire wiped out the diesel plant, the nation installed 12 wind turbines, with enough capacity to meet the island’s total demand, at least when the wind is blowing. The turbines are augmented by a 6 MWh battery backup system to carry them through brief wind lulls.

For longer periods, there are more diesel generators, but these soon will be run on locally grown bio-diesel produced from algae. When this capability is fully operational, the island will have 100 % renewable power, with 40 to 45 % coming from wind and the rest coming from the biodiesel.

Electricity prices also have come down for residents. So, tiny Bonaire has set the bar, followed by Costa Rica. Who else will step up to the plate and claim some clean energy bragging rights? – GreenBiz