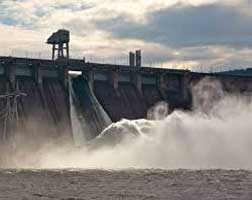 BEIJING – China could be wasting enough hydroelectricity to power Britain and Germany for a year, depriving its smog-bound eastern regions of huge volumes of clean energy as a result of poor planning and weak grid infrastructure.

An often controversial dam-building programme raised China’s hydropower capacity to 300 gigawatts last year, but a preoccupation with capacity rather than efficiency and grid connectivity has created huge local surpluses that are often literally flushed away, executives said.

Hydropower is a key component in China’s efforts to cut coal use and meet pledges made during global climate talks to raise the share of renewables in its total energy use – which includes fuels used for heating and vehicles as well as power – to 20 percent by 2030, up from 11 percent now.

And thanks to slowing growth in demand for power it has been making headway, allowing the grid to take on more clean energy at the expense of the country’s coal-fired power plants, where utilisation rates have plummeted.

In the first four months of this year, when power generation as a whole rose just 0.2 percent, hydropower generation rose 15.3 percent, and its total share of the power mix rose to 17.3 percent last year from 16.9 percent in 2013.

Doubling Chinese hydropower usage could cut coal use by about 500 million tonnes a year.

In the southwestern province of Sichuan, where hydro output rose 19.1 percent in January through April, official National Energy Administration data showed that plants were forced to release water that could have generated an additional 9.8 billion kWh last year had the grid been able to absorb it.

One of Sichuan’s rivers, the Dadu, is emblematic of the problems. Developers there were encouraged to build dozens of dams with little regard to overall planning or the environment, creating a huge glut.

“It was like a piece of meat being chopped and chopped very badly,” said Xie Changjun, the vice-president of the Guodian Corporation, one of China’s “big five” state power firms, which has seen its local Dadu river subsidiary suffer as a result.

REFORMS TO THE SYSTEM

Lost power is a problem not only in hydro, but also in wind, and China last week published guidelines banning new wind farms in regions where waste already exceeded 20 percent.

“We are currently looking for ways to solve problems like discarded wind and discarded water,” said Shi Lishan, vice-head of renewables at China’s National Energy Administration, speaking at a conference last month.

Supply and demand imbalances were normal in a sector with lengthy construction times, he said, but “reforms to the system” could solve the problems.

Some of those reforms could include plans to allow industrial firms to sign power supply contracts directly with local power plants instead of going through the grid, but that is unlikely to help hydro plants in remote southwest China, where industry is undeveloped and local power demand weak.

Long-distance ultra-high voltage lines built by the State Grid Corporation shipped 100 billion kWh across the country last year, but are dedicated to delivering power from central government-administered plants like the Three Gorges. Power from less prestigious projects is often left stranded, including those on the Dadu, where Guodian’s plants have struggled.

Many projects on the Dadu were approved by the regional government to meet double-digit increases in local power demand, but growth has now slowed considerably, said Zhang Zhengling, deputy director at the State Grid’s development and planning department.

Two years ago, the smaller plants could still use the State Grid’s spare transmission capacity, but that is no longer available now that giant dams like the Xiangjiaba and Xiluodu, both in Sichuan, have been completed, he told Reuters.

“The big projects don’t have any waste problems, but those on the Dadu are medium-sized or even small, and their market is in Sichuan,” he said, adding that China’s power sector was still state-planned and needed to be more responsive to the market.

Guodian’s Xie said that the economics of hydro were making it difficult to justify further investment.

“I personally propose that the central government improves coordination and harmonises economic interests between provinces that deliver power and provinces that receive it,” he said. – Reuters