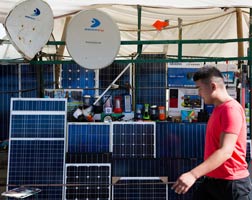 Large banks have been shunning solar projects which are often small in scale. This has led these projects to rely on crowdfunding instead. An example is Kong Sun Holdings Ltd. Denied a bank loan, it went online to seek for funding. The Hong Kong-listed solar developer was granted a1 billion yuan (US$161 million) loan from the Internet investment platform called Solarbao.com which covered a 10-megawatt unit.

“Banks decline to lend to small projects” because the due diligence takes too much time when compared with larger projects, said Liu Wenping, executive director of Kong Sun.

Kong Sun’s case is emblematic of a broader challenge facing small developers in China. Though solar installations are booming in the world’s biggest market for the technology, the majority of growth is in sprawling industrial-sized projects.

The result is that developers struggle to find lenders willing to bet on the more modestly-sized solar projects typically found atop schools, factories and municipal buildings.

Ventures like Solarbao may ultimately prove an important source of funding for China’s aspirations in clean energy. The nation needs investment of 737 billion yuan in photovoltaics between 2014 and 2017, more than 70 % of that sum for smaller systems, according to Ernst & Young LLP.

Crowdsourcing for these projects is still at an early stage. Solarbao, which started earlier this year, has helped more than 50 projects raise funds. It doesn’t disclose how much money is involved.

Backers say crowdfunding in China will grow along with small-scale solar projects “distributed” close to power consumers. Last year, China completed 2 gigawatts of distributed solar, a quarter of what it had targeted, according the National Energy Administration.

China may add as much as 19 gigawatts of solar power this year, with distributed projects accounting for 5 to 7 gigawatts, according to Bloomberg New Energy Finance.

Most smaller projects are developed by small firms or individuals, “which generally find it hard to get financing in China,” said Peng Xiaofeng, founder of LDK Solar Co., which was the world’s second-biggest wafer maker until it entered liquidation in February 2014.

Seeing a gap, Peng worked with Solar Power Inc., a Shanghai-based developer of photovoltaic projects owned 20 % by LDK Solar, to set up Solarbao in January.

Similar to crowdfunding websites including GoFundMe, Kickstarter and Indiegogo, Solarbao.com aggregates financing from anybody who wishes to make a contribution. Kickstarter last year funded more than 22,000 projects, and almost US$530 million was pledged, according to its website.

In Solarbao’s case, contribution levels start as low as 1,000 yuan. That entitles the investor to a single solar panel which is then leased to developers, or to a slice of income from leasing the panel. The investment’s return and period is set by Solarbao and the developer of the project.

Companies leveraging web financing are “grasping a good market opportunity, but their impact on the entire market is currently limited,” said Nick Duan, an analyst at Bloomberg New Energy Finance in Beijing.

Chinese banks tend to favor either large listed companies or those owned by the state, said Wang Yun, manager of the marketing at Solarzoom. The online organization helps project developers find contractors and loans.

Even if bank lending can be secured, smaller borrowers generally pay higher rates, he said.

That’s the case even with Solarbao. Through the website, project developers pay an annual interest rate of 6 % to 10.6 %, said Peng of SPI. The People’s Bank of China currently has the benchmark rate at 5.25 % for mortgages of up to five years.

“The Internet finance model is immature” and is in need of good-quality projects that can be better evaluated, said Tang Wenqian, secretary-general of the China Photovoltaic Power Investment and Financing Alliance. “It’s moving in the right direction, and the potential is big.”

United Photovoltaics Group Ltd., a Chinese solar-farm operator, plans to use more crowdfunding by the end of the year, Chief Executive Officer Alan Li said in May. In 2014, the Hong-Kong listed operator raised 10 million yuan for a 1-megawatt plant in the southern city of Shenzhen.

Crowdfunding’s long-term success may depend largely on whether risk can be lowered, said Gong Siwen, an analyst at Northeast Securities Co. in Shanghai.

It has the potential to “become an important source of capital,” Gong said.