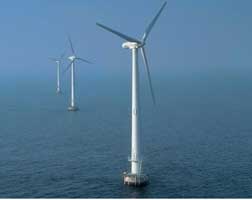 The world’s first offshore wind farm, the 4.95-megawatt (MW) Vindeby offshore wind farm located in the Danish Baltic Sea near the island of Lolland, is set to be retired by Danish wind energy giant Dong Energy.

The 25-year-old Vindeby offshore wind farm was completed in the summer of 1991 with 11 small 450-kilowatt (kW) wind turbines. The wind farm set the Denmark up to be one of the world’s early offshore wind leaders.

“Vindeby Offshore Wind Farm is almost miniature-size in comparison with the giant projects which are now being realised in Northern Europe,” said Leif Winther, responsible for Dong Energy’s Danish offshore wind farms. “But without the experience gained from the world’s first offshore wind farm, we wouldn’t be where we are today. It’s fair to say that Vindeby is the cradle of the offshore wind industry, and that this is where the industry was born.”

It was announced back in early 2016 that the Vindeby offshore wind farm would be prepared for dismantling, when Dong Energy sought dialogue around what could be done with the infrastructure which has been built up around the park.

“There are cables with an associated substation onshore, and it might be interesting for companies interested in renewable energy,” Winther said back in February of 2016. “We would like to enter into dialogue with them prior to dismantling the wind farm.”

More than that, however, the dismantling of Vindeby offers the first steps to learning how to proceed with dismantling the much larger offshore wind farms which will happen inevitably over the coming years and decades.“In future, other and much larger offshore wind farms will also have to be taken down. How to do that most efficiently and with the greatest possible consideration for the environment is still uncharted territory. In this context, Danish companies can perhaps get a head start, just as they did when we started the expansion of wind power.”

All the components of the wind farm will be taken down individually by a mobile crane on board a jack-up vessel. The parts will then be sent onshore to Nyborg Harbour, where Dong Energy will attempt to reuse the components as much as possible as spare parts for other wind turbines. Some of the wind turbine blades are actually set to be used as part of a research project at DTU Risø, while others are earmarked for use in a noise barrier concept.