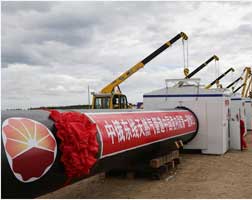 Russian gas giant Gazprom is set to supply gas to China through the east route of the China-Russia natural gas pipeline, also known as the Power of Siberia trunk pipeline, starting May 2019 instead of the earlier planned schedule in 2018, according to the company’s vice-president Andrey Kruglov.

Kruglov said the delay was because it took almost a year to get all the necessary approvals after a deal was signed in May 2014. He added that discussions on the west route have advanced to a mature stage.

According to the contract signed under the witness of Chinese President Xi Jinping and his Russian counterpart Vladimir Putin, the east route of the pipeline will transport 38 billion cubic meters of natural gas every year to China over a period of 30 years starting from 2018.

Kruglov said the amount of gas expected to be transported to China might match, or even exceed, east route’s 38 billion cubic meters as the gas field in West Siberia could supply more.

Natural gas consumption in China is projected to reach 360 billion cubic meters, accounting for 10% of the entire energy mix, up from 6% in 2014.

The Asia-Pacific, which is becoming more and more important, is of strategic importance to Gazprom, said Kruglov. He added that the company’s Asian investors have doubled in the past four years.

Gazprom and China National Petroleum Corporation’s (CNPC) cooperation on such a large gas project has laid a solid foundation, including in the financial sector, for the company in the Asia-Pacific, said Kruglov.

He said the company might offer shares in an Asia stock market and added that the company has been in talks with the Hong Kong Exchanges for some time.