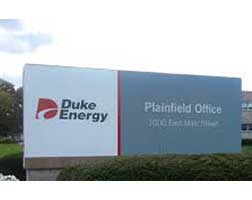 Duke Energy has been given the green light by Indiana regulators to buy 20 megawatts of power from four solar farms.

The Indiana Utility Regulatory Commission on Thursday approved agreements between Duke Energy Indiana and the developers of the four solar farms that will be built in Kokomo in central Indiana and Clay, Vigo and Sullivan counties in western Indiana.

Senior Inovateus Solar account executive Conrad Chase said the company will break ground this fall on a $10 million solar farm in Kokomo that will have about 21,000 solar panels that will generate 6.5 megawatts of electricity when it comes online by next spring.

That project will be built on about 25 acres at the former Continental Steel plant that became a federal Superfund site in the 1980s, the Kokomo Tribune reported (http://bit.ly/1NNWBvE ).

After the steelmaker went bankrupt in 1986, studies showed the 183-acre property was contaminated with solvents, PCBs and lead.

The Indiana Department of Environmental Management and the U.S. Environmental Protection Agency spent more than $40 million cleaning up the site, which was once on the EPA’s Superfund list of the nation’s most dangerous sites due to high levels of toxic pollution.

Inovateus has signed a 20-year agreement with the city to lease the site property.

Kokomo city Engineer Carey Stranahan said the deal will reduce the amount of maintenance the city will have to perform at the Continental Steel site.

“We will be receiving revenue, but we will not have to invest too many resources,” he said. “… Solar energy has a very low impact on the environment, which was attractive to us.”

Chase said the new solar park will bring both a multi-million dollar investment to Kokomo and repurpose a piece of property that can’t support most kinds of development.

“This is an old site that had very limited use, so a solar park is a perfect fit for a place like this,” he said.

Duke Energy is the largest electric provider in the state, generating about 7,500 megawatts of owned electric capacity to approximately 800,000 customers. The utility last year issued a request for proposals from companies interested in supplying it with solar energy.