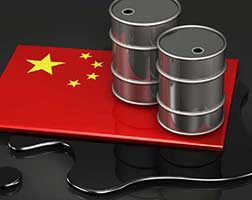 Aggressive trading – with heavy buying by Chinaoil met by selling from Unipec – has pushed up Middle East crude prices for Asia, even as other grades are being pressed lower by a global glut.

Asian buyers are being driven to seek cheaper oil elsewhere or cut refinery runs, but analysts say Beijing is unlikely to intervene in a process that reflects the growing clout of Chinese traders in global oil markets.

The volumes exchanged by the two firms have been so high that pricing agency Platts is considering whether to allow more crude into a pool of supplies it uses to assess its daily Asian benchmark, the Dubai crude price.

“This was bound to happen – as Chinese traders become more familiar with global trading mechanisms, and their power within them increases, they are increasingly happy to work within them while also learning to use them to their advantage,” said Michal Meidan of consultancy China Matters.

Set up in 1993 to help manage China’s oil imports, the state-owned firms have developed from simply procuring and marketing oil and refined products into sophisticated traders with global trading desks.

The changes have been hastened by the ascendancy of career traders to the top of both companies in 2014, replacing corporate planners or refinery managers, while falling oil prices and slower demand growth have led to a push to boost trading profits.

Chinaoil, which trades for Asia’s largest oil producer PetroChina and has built itself into an integrated oil firm along the lines of BP, is now headed by former trader Zhao Yong.

“With their rich trading experience, these new managers are more conscious of making a bigger impact than their predecessors,” said a senior trading source with direct knowledge of the matter.

In a series of buying sprees that began in October last year, Chinaoil has been snapping up record numbers of oil cargoes during a pricing mechanism that sets benchmark pricing for 12 million barrels per day (bpd) of oil sold in Asia, about 13 percent of the global consumption.

The strong bidding has pushed up the benchmark price, fuelling speculation that Chinaoil was aiming to reap big profits on positions it had taken in the derivatives markets.

On the other side of the market, Unipec’s parent Sinopec imports nearly 80 percent of the 4.8 million bpd it processes – more than half of which is priced off Dubai – and its trading arm is preoccupied with keeping prices low.

The rivalry has seen the pair duelling in the Singapore-based Platts Market on Close (MoC) assessment process, with Chinaoil bidding up Middle East cargoes and Unipec selling in an effort to restrain prices.

Chinaoil has been breaking monthly trade volume records, buying 47 cargoes in October 2014, before taking a record 55 cargoes in April and 18 cargoes in June, with Unipec the seller for more than 60 percent in the April and June trade.

Earlier this month, Chinaoil snapped up 10 cargoes from Unipec in a single day, the highest daily volume on record.

The buying accorded with data from the Intercontinental Exchange showing a sharp build-up late last month in Dubai futures, that traders said suggested a likely “bull play” or move to push the physical price higher this month.

“The first day of trading this month exceeded the volume of crude Saudi sells in Asia in a day. That is astronomical,” said a source with a Gulf oil producer.

As trading intensifies, the Chinese pair have displaced global players like Royal Dutch Shell or top-league traders like Vitol who previously dominated the Dubai market.

Chinaoil’s oil trading volume more than quadrupled between 2003 and 2013, when a record 2.7 million barrels a day (bpd) was traded, while turnover grew nearly 18 fold to hit a record in 2013 at $102 billion, according to data on its website.

In an internal shakeup last year, the firm set up a Beijing-based China Team that manages all of its China-related trading positions for crude oil, giving it more scope for trading, said senior traders with direct knowledge of the situations.

Unipec too has shown signs of change in its trading strategy. The company bid in July and bought five cargoes, traders said.

“Unipec used to have many adversaries in the market due to its sheer size of crude purchasing. But now we face one powerful opponent, Chinaoil,” said a senior source at Unipec who declined to be identified. “The two have opposing trading interests.”