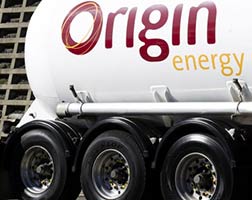 Shares of Origin Energy has taken a 13 % dive. This follows their announcement that it would take $1.8 billion to complete its Australia Pacific LNG venture.

The main issue that seems to have surprised people is the mount of money that still needs to be spent on APLNG.

At the same time, without a recovery in the oil price Origin’s cash revenues from the project are set to be a fraction of the $1 billion a year it estimated several years ago.

“The main issue that seems to have surprised people is the amount of money that still needs to be spent on APLNG,” said Suhas Nayak at Allan Gray, which owns Origin stock.

“That was higher than expected and given the already large amount of debt that they have adding to it in this stage of the cycle is concerning, and that definitely worries us.”

The news on Origin compounded the sell-off already triggered across the sector by a further slide in global oil prices with Santos sliding 7.1 % and junior Senex Energy losing 12.5 %.

Origin is ramping up cost cuts to offset some of the impact of the APLNG costs and revenue shortfall, targeting a further $200 million of savings from the 2017 financial year, which will see about 800 job losses. Capex investment outside APLNG is also being further reined in.

“People are worried about the balance sheet and the oil price keeps going down,” UBS energy analyst David Leitch said.

“It looks like capex in 2016 is going to be higher than we and the market had previously published. The company has also announced new cost out targets, which are positive.”

Mr Leitch has calculated that at current soft oil prices, Origin may be forced to act to defend an investment grade credit rating, after Standard & Poor’s cut its rating to one notch above junk in April. Its options include eliminating the dividend, selling assets and an equity raising.

But chief executive officer Grant King said that with $5.8 billion in cash and undrawn debt, Origin had the capacity to fund it through the completion of APLNG and for its other businesses.

Executive director finance and strategy, Karen Moses, said the two key ratings agencies were both “pretty relaxed” about the full-year earnings report, signalling there would be no impact on ratings.

The news on APLNG has revived concerns about the profitability of Australia’s new wave of LNG projects, especially those in Queensland that require ongoing drilling of coal seam gas wells. But Mr King said the prices available through LNG were still about three times the historical prices for gas on the east coast.

“Even at lower oil prices, LNG is producing very good value for Australian gas,” he said.

Origin reported heavy full-year loss of US$658 million as impairments in the oil and gas business and in the now-divested Contact Energy hit the bottom line. Underlying profit slid 4 % to US$682 million, in line with consensus.

Chairman Gordon Cairns said the 2014-2015 and 2015-2016 financial years were always set to be “transitional years” for Origin as construction completed on APLNG.

Origin had anticipated reaping about US$1 billion of cash flows from APLNG, starting in the first full year of production in 2017, assuming oil prices of US$100 a barrel.

But every US$10 a barrel decline in the oil price cuts its share of distributions from APLNG by US$200 million. With Brent oil trading at about $US47 a barrel, or about US$64, Origin would get only about $180 million a year at current prices.

UBS’s Mr Leitch said that at current spot prices, the distributions from APLNG are insufficient to “meaningfully” pay down the company’s debt, which still totals around US$10 billion even after the sale of the Contact Energy stake last month.

JPMorgan analyst Christopher Laybutt described the APLNG funding issue as “a disappointment” rather than a surprise.

Origin’s energy markets business prevented a bigger dip in core profit, with a 6 % increase in raw earnings from a year earlier thanks to increased gas sales and prices. Earnings from the oil and gas business were down on lower prices.

The company declared a final dividend of 25¢, on a par with the same time a year ago.