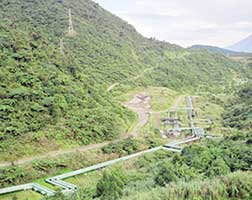 He said the target is to complete the fund-raising by July.

The loan will be used by BGI to pay EDC’s expenses related to the acquisition of rehabilitation of the Bacon-Manito (Bacman) geothermal facility.

“EDC parent paid for the purchase price and rehabilitation of Bacman in the past,” Mr. Avante said in a text message.

“When BGI raises the money, it will repay the parent. The parent will then use the money expand Bacman steam field among others,” Mr. Avante explained.

EDC said last month the company will invest US$150 million to undertake a 30-megawatt (MW) expansion of its Bacman geothermal power plants.

The plant construction — which is expected to start next quarter — will take around 27 months.

The project cost will be funded by a combination of debt and equity.

EDC submitted the highest bid of US$28.25 million for this power facility in an auction in May 2010 conducted by the Power Sector Assets and Liabilities Management Corp.

When Bacman was acquired, the facility generated just 3% of its full capacity. The company started rehabilitation of the plants in December 2010.

Following a series of rehabilitation activities that were completed early this year, the facility is now producing 140 MW.

Two more expansions of the Bacman facility is also in the pipeline. These might include another 17 MW to 20 MW and another expansion activity with a “larger potential” capacity.

EDC is the largest producer of geothermal energy in the Philippines. It operates 12 power facilities in five geothermal service contract areas in the country.

The company is a subsidiary of First Gen Corp., another company owned by the Lopez family.

CLASSROOMS
In another development, the Lopez Group — through First Gen, First Balfour, Inc. and First Philippine Electric Corp. — allotted P58 million to undertake a rebuilding project in the Visayas that will benefit areas that were hit by super-typhoon Yolanda in 2013.

The companies yesterday held a ceremonial groundbreaking for the construction of 43 classrooms in 20 sites in Leyte, Eastern Samar and Capiz.

The project will serve as the third phase of the Lopez Group’s P230.57-million rebuilding program, which aims to put up 122 classrooms by the end of the year.

“The Lopez Group has volunteered to act as a development sponsor in Leyte for government’s overall rehabilitation and reconstruction of areas devastated by the super-typhoon” said Renato A. Castillo, First Gen senior vice-president and head of Risk Management, said during the ceremonies in Leyte. – Business World Online