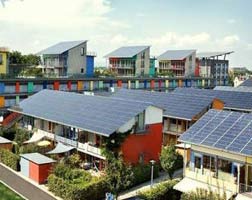 Experts are divided on whether the European Commission’s proposals to foster an Energy Union are strong enough to drive forward energy efficiency measures, and in particular the renovation of existing buildings

Retrofitting the building stock has enormous potential to make huge savings and give the construction sector a much needed shot in the arm.

70% of the EU’s existing building stock is highly inefficient, Climate Action and Energy Commissioner Miguel Cañete told reporters at a press conference after EU energy ministers met in Brussels on Thursday (5 March). Meeting Europe’s full efficiency potential would cut gas imports by 40% over the next fifteen years, according to Commission analysis.

On 25 February, the executive published its proposals for the Energy Union, a flagship initiative to strengthen the bloc against the risk of energy shortages. The EU imports more than half of its energy every year.

The paper sets out the Commission’s thinking on what it describes as the biggest energy project since the creation of the Coal and Steel Community. The vision, put simply, is to create a bloc where surplus energy in one place can be moved to where there is a shortage, thereby bolstering the EU’s resilience to shortages.

The Energy Union was given political impetus after the Ukraine crisis brutally exposed Europe’s energy dependence and vulnerability. Shortages caused by Russia turning off the taps in 2009 have prompted the union to develop plans which go beyond to encompass issues such as climate change.

Some campaigners have pushed for “efficiency first”. RenovateEurope insisted on giving priority to energy demand rather than supply.

The Commission stopped short of that. Instead, it used less definitive language, calling on member states to give efficiency “primary consideration” in their national policies.

But it did come out strongly in support of efficiency and, explicitly, building renovation.

“Buildings have huge potential for energy efficiency gains,” it says. “Retrofitting existing buildings to make them energy efficient and making full use of sustainable space heating and cooling will reduce the EU’s energy import bills, reinforce energy security and cut energy costs for households and businesses.”

“Member states and regions should make more use of European funds for renovation of housing,” it adds.

The Commission will develop a “Smart Financing for Smart Buildings” initiative to make existing buildings more energy-efficient. The initiative will make applying for those existing funds easier. The executive will also propose a strategy to facilitate investment in heating and cooling.

Any strategy will be worthless without proper implementation. There are EU building efficiency laws, for new and existing buildings, but they have not all been properly implemented by member states.

The Commission can draw attention to the issue, draft laws and give guidance. But without strong backing from national, regional and local governments, building renovations will simply not happen, said EU officials.

Energy efficiency has a significant role in both energy security, reducing the amount of energy used, and minimising the impact on climate. It should be regarded as another kind of energy supply, Cañete said last week.

But it has to compete with the other dimensions of the Energy Union, such as an overhaul of the internal electricity market, or the construction of new infrastructure, for attention, priority and, crucially, funding.

When it comes to the supply side, the debate ranges over finding new energy suppliers in the Caspian region, the Middle East and Africa, and improving interconnectivity within the EU itself.

Fresh investment in fossil fuel infrastructure, such as gas, drains possible EU backing for efficiency from, for example, the Juncker investment plan.

Campaigners explain that if one accepts efficiency as an energy source, then the argument could be made that EU’s building stock be classified as infrastructure for investment purposes. That could allow private investors to benefit from a lighter regulatory touch if they chose to invest in renovation.

But, according to environmental activists, the Ukraine crisis has led to policymakers concentrating too much on gas infrastructure, ignoring the fact gas demand is predicted to drop in the future. That will lead to stranded pipelines, they warn,

The situation in Ukraine remains highly volatile after the annexation of Crimea, the shooting down of the Malaysia Airlines flight by Russian-backed separatists, and EU sanctions on Russia.

The Minsk ceasefire was only struck last month but remains fragile. In such a context, it’s understandable that EU leaders’ attention is drawn away from the relatively staid question of renovating buildings.

That was highlighted last week by the omission of energy efficiency from the draft agenda for the 19-20 March meeting of EU leaders in Brussels.

The document, circulated by the European Council secretariat to member states, focused on responses to Russia and to climate change.

Council President Donald Tusk spearheaded the idea of Energy Union, when he was Poland’s prime minister. Given Poland’s relationship with Russia, and fossil fuel industry, it’s not surprising green groups leapt on the omission.

But it also gives a concrete example, early on in the process, of how energy efficiency in buildings, and in general, can easily drop down policymakers’ priorities.

EurActiv understands that, at the meeting of EU energy ministers, 11 member states – and the Commission – pushed for efficiency to be included in the conclusions of the 19 March summit. They were Germany, Sweden, Denmark, France, Belgium, Greece, Spain, Luxembourg, Netherlands, the United Kingdom and Czech Republic.

The next iteration of the conclusions, which will ultimately be agreed by the heads of state and government, may reflect that desire or, at the very least, include stronger language supporting the efficiency dimension.

Climate change and diplomacy is also high on the political agenda.That is of crucial importance in the run-up to the UN Climate Change Conference in Paris in December. The conference aims to set a legally binding target of keeping global warming below two degrees.

In October last year, EU leaders agreed a legally binding target of 40% reduction of greenhouse gas emissions, compared to 1990 levels. But they were only able to agree an EU-wide target of 27% for energy efficiency. That goal is also non-binding at national level.

That raises questions about how such a goal is to be reached or enforced.

“In 2015 and 2016, the Commission will review all relevant energy efficiency legislation and will propose revisions, where needed, to underpin the 2030 target,” the Energy Union blueprint states.

The 2030 climate and energy targets are a signal of intent before Paris. It is only after Paris that work will begin on deciding how the governance framework will work, and start drafting EU legislation.

But in practice, it is likely to be a fractious process with member states guarding their authority over their energy mix and policy. That has already been demonstrated by the inability to agree national level binding targets.

One idea, from the renewables industry, is to have a tendering process to allow the EU to hit its EU-wide 27% target, even if individual member states don’t hit their 27% at national level.

In the case of a percentage shortfall at EU level, the difference would be put out to tender, with companies – a Spanish windfarm for example –  bidding to make it up.

Such a framework could be put in place but EurActiv understands it is at the very earliest stage of consideration at the Commission.