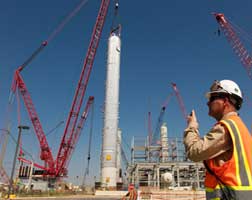 US-headquartered ExxonMobil Chemical Company and Riyadh-based Sabic’s joint plans for the development of a petrochemical plant on the US Gulf Coast have been narrowed down to Corpus Christi, San Patricio County, Texas.

The partners had been eyeing four sites for the US$10 billion investment-facility, including two in Louisiana and one other in Texas near Victoria. However, the Corpus Christi site proved to be a strong contender, with reports quoting some US$1.2 billion tax breaks having been given for the project.

The 1,300-acre proposed project will include a world-scale ethane steam cracker capable of producing 1.8 million tonnes/year of ethylene, which would feed a monoethylene glycol unit and two PE units.

Sabic says the project, currently under study, reflects its strategy to advance the company’s growth in key markets such as the US. Yousef Al-Benyan, Sabic Vice-Chairman/CEO said, “The proposed venture would capture competitive feedstock, capitalise on the growing global demand for ethylene-based products, and reinforce Sabic’s strong position in the value chain.”

With site selection completed, ExxonMobil and Sabic will now apply for the necessary air and wastewater permits from the Texas Commission on Environmental Quality. Each company will make a final decision on the investment after the required permits have been granted.

Several companies have firmed up projects in the US Gulf Coast, taking advantage of the supplies of shale-based natural gas as feedstock for their plants.