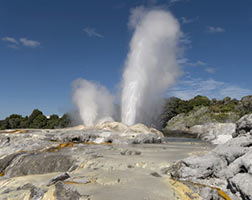 HSBC shake-up: What it means for trade finance

IFG and EBRD team up for factoring education

Turkey’s largest geothermal power plant has been awarded a total US$720mn, 15-year financing from both commercial and development banks.

Türkiye İş Bankası (İşbank) is making the biggest contribution with a US$325mn loan, the European Bank for Reconstruction and Development (EBRD) is offering US$200mn, while an additional US$130mn comes from Turkiye Sınai Kalkınma Bankası (TSKB) and US$65mn from the Black Sea Trade and Development Bank (BSTDB).

The Efeler geothermal plant is being built by a subsidiary of Güriş Holding, a Turkish renewable energy company. Three of the plant’s five units are already operational. Once completed later this year, the plant will reach 170MW capacity, making it one of the 10 largest geothermal plants in the world.

It will also increase the amount of installed geothermal capacity in Turkey by about 30%. The geothermal potential in the country is estimated at around 4GW, of which only 427MW has been developed to date.

Nandita Parshad, director for power and energy at EBRD, says: “We are strong supporters of geothermal sources of energy as a way forward for Turkey’s energy mix. Geothermal technology combines high efficiency with renewable energy and can also serve to satisfy baseload demand. If the country realised all of its potential of 4GW geothermal, it would be equal to adding a further 12-15GW of wind or solar power.”

The EBRD is also planning to provide finance and advice for companies that are just starting to invest in geothermal energy, helping them to minimise their exploratory, drilling, technical and financial risks.- GT Review