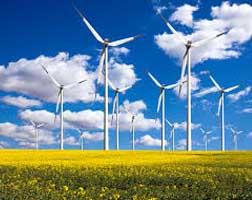 President Joko “Jokowi” Widodo early in May launched the first on-shore wind turbine farm in Indonesia, in Bantul, Yogyakarta. It was the first large-scale wind energy implementation in Indonesia built by a joint venture company of PT Binatek Energi Terbarukan and UPC Renewables Indonesia Ltd. of the United States.

The plant, scheduled to be completed in 2019, will have 33 wind turbines, each with a capacity of 1.5 to two megawatts (totaling 50 MW) and will cost about Rp 1.5 trillion (US$134 million). The company will sell its power to the state electricity company (PLN).

Here are five things that we need to know about Indonesia’s first wind energy farm.

Bantul not actually is the best place for wind energy in Indonesia because of the wind speed. The optimum location would be in the southeast (Flores, Nusa Tenggara) where wind speeds can reach 6 to 7 meters per second, compared with Bantul where the average wind speed is around 5 m/s.

Nature also provides several options that are sometimes difficult to choose between. For example, if this wind turbine farm is compared with other renewable energy sources, such as hydro, geothermal or solar PV, the choice between the types of energy that would be the most suitable for Indonesia would be more challenging to make.

The cost of developing wind energy is very high, especially with the off-shore wind turbine. The International Renewable Energy Agency (IRENA) indicates it costs around $3 to 4 million per MW to build off-shore wind turbines, compared with geothermal power plants that cost around $2 to 3 million.

Coal-powered plants have an average capital cost of less than $1 million per MW.

The cost analysis in selecting the best energy generation that suits Indonesian geography is also challenging given the many alternative energy sources in Indonesia, such as geothermal, coal and solar power.

Even on an international scale, the cost analysis of energy is difficult to make because of the many technical aspects that affect the analysis.

However, in general that reminds us that investment in renewable energy is not cheap.

Without the proper energy mix the cost needed for Indonesia to catch up with the latest energy developments would be very high.

One of the key advantages of renewable energy is the ability to work in areas that do not require good infrastructure such as fuel supplies, in contrast with coal and gas power plants that require a stable access to fuel. This advantage should be considered in developing a renewable energy power plant.

With this advantage, the priority to develop a power plant should be in a location where the electrification ratio is still low.

This is the classic reason why an understanding of the energy balance is very important. It would be so much easier to reduce energy consumption instead of increasing energy production.

Based on the above five factors, the development of the first large-scale wind turbine farm in Indonesia is mandatory and even on the national level it should be promoted, as this would indicate a milestone of new energy development in Indonesia.

As this project goes, further soft infrastructure such as a Feed in Tariff (FIT), regulations and protections also need to be improved.

Wind energy is just a small component in the overall energy dynamic; however, this small component might be the most important factor in accelerating energy development and production in the country. – The Jakarta Post