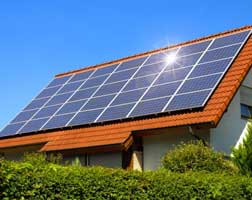 A new law in France says that all buildings in commercial zones must have part of their roofs covered with plants or solar panels. The law is in response to French environmentalists who wanted entire roofs to be covered, but settled on a compromise to see how the law will take effect.

Solar panel on the roofs of businesses is beneficial because it helps reduce the amount of energy they use while creating sustainable, renewable energy instead. Green rooftops also significantly reduce heat in urban areas.

This concept is already common in countries like Germany, Australia and Canada. Plants create an isolating effect to help reduce the energy required to heat and cool the houses.

Last year, the World Health Organization stated that outdoor air pollution has been classified as an environmental cause of cancer deaths. Currently, Germany takes the lead in the advantages of green roof research with more than 10% of houses having plant-covered roofs and that number increasing each year by 10 to 15%.