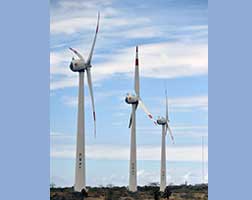 ECUADOR: The Galapagos islands are known, of course, for those lumbering, giant tortoises and as the inspiration for Darwin’s theory of evolution.

Now they boast another cool distinction: an airport believed to be the only one in the world working exclusively on wind and solar energy. The metamorphosis to an earth-friendly place serving nature-loving tourists could not be more stark, considering that the airport was actually born of war.

During World War II, US forces built an airfield here on Baltra, one of the 13 islands that make up the Galapagos archipelago in the Pacific, roughly 1,000 kilometers (660 miles) off Ecuador.

It was an outpost meant to counter a possible Japanese advance in the Pacific war theater. Weapons were stored here. Until recently, you could even find deactivated bombs nearby.

But after a 15-month engineering feat that began in 2011 and cost US$40 million, the facility could not be more different. Last year, it won a major US award for environmentally friendly design.

“We’ve gone from being a place where there were military and aircraft to being an airport that is 100 % ecological,” said Ezequiel Barrenechea, president of the Argentine corporation operating ecofriendly Seymour airport, one of three serving the Galapagos.

Indeed, there have been changes big and small. The Americans who came in to oversee the wartime military airfield brought dogs and cats as pets. These critters preyed on the island’s iguanas – prehistoric looking, some of them sporting fabulous shades of blue, red and yellow or a rainbow-like mix of them – and the iguanas vanished, for decades.

With time, however, after the war biologists reintroduced the cat-sized creatures, this piece of the Galapagos once again features the lounging lizards.

Today, when they are spotted hanging out on the landing strip as a plane full of tourists approaches, specially trained personnel go out, pick them up by the tail and carry them to safety.

Yes, once again, the island is safe for them.

The airport’s environmental conversion began in 2011 when the simple wooden building that was most of the terminal was taken apart, piece by piece. It had a metal control tower that looked like a giant standing in the middle of nowhere.

The wood and anything else at hand deemed useful was employed to rebuild the airport with the strict mandate that it be totally selfsustaining. It works with solar panels and three giant wind turbines. The terminal has no glass panes in its windows, leaving it open to the island’s strong winds. Some 400,000 people pass annually through the Baltra airport. Holding up the building as part of its foundation are cylindrical pillars that used to be pipes for moving oil – a seeming slap at dirty energy sources.

As for energy used to run the place, the only – necessary – exception to the sustainable source rule are air conditioners that cool a room housing machinery.

“Building in the Galapagos was already difficult because you have to bring everything over by boat. But building in a sustainable fashion is even more complex anywhere,” said Barrenechea.

“Add all of this up and you have a major engineering achievement,” he added.

But the effort paid off. In 2014 the airport won a LEED Gold sustainability certification, an honor given out by the US Green Building Council.

It was the first airport to get such a nod for its entire structure. Until then only a San Francisco terminal extension had received the plaudit. To compensate for the lack of air conditioning in the terminal, the 6,000- square-meter building has very high ceilings that are finished with volcanic stone, typical of the area.

“A user does not notice the difference because it works just like any other airport,” he said. – AFP