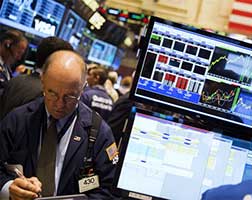 NEW YORK – Wall Street’s Nasdaq stock index ended at a record high on Friday on a rally in Google shares, while weak energy stocks and disappointing corporate results from companies such as Boeing and Volvo hit other European and U.S. indexes and the dollar rallied on strong U.S. inflation and housing data.

Google surged 16.26 % to end at an all-time high of US$699.62, pushing the Nasdaq to a second straight record high. A 6.3 % drop in Volvo shares and a halt to a Greece-driven relief rally stymied European shares, meanwhile, while a 1.1 % drop in Boeing shares and a similar tumble in the S&P 500 energy index weighed on the Dow and limited the S&P 500’s gains.

Energy stocks slid on the back of a drop in oil prices, which later rebounded from their lows. In Europe, oil and gas shares ended 0.52 % lower <.SXEP>.

“Whenever we see oil tick down, people worry about global growth,” said Karyn Cavanaugh, senior market strategist at Voya Investment Management in New York. She added that earnings “have been a little bit of a touch-and-go situation.”

The U.S. dollar index which measures the greenback against a basket of six major currencies, was last up 0.29 % on Friday and notched its strongest weekly gain since May, of about 2 %.

“The focus is turning to the U.S. rate cycle, and (the market reckons) a September rate hike is still, if not probable, at least possible,” RBC Capital Markets global head of FX strategy Adam Cole said.

International benchmark Brent settled up 18 cents at US$57.10 a barrel, while front-month U.S. crude futures settled down 2 cents at US$50.89. – Reuters