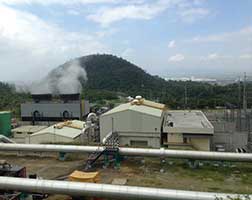 Last month, PetroEnergy reported that MGI completed tests within the site that confirmed sufficient steam to support the 10-MW expansion of the operational geothermal project in the municipality of Sto. Tomas.

Expansion activities for the project started as early as the second half of last year, when MGI drilled two wells to check the availability of additional geothermal resources in the area.

PetroEnergy said these wells were completed ahead of schedule and tests were conducted between December 2014 and May.

Mr. Delfin said in April that the project expansion involves an investment of up to P1.3 billion — which will be funded by debt and equity on a 70-30 basis.

He said on Thursday that discussions for project finance are ongoing and financial closing is expected soon.

For its maiden solar energy venture, PetroEnergy has also started development activities on a 50-MW solar farm in a 50-hectare site near Hacienda Luisita in Tarlac City.

“Target commercial operations for the project is in the first quarter of 2016,” Mr. Delfin said last Thursday.

PetroEnergy is also building a 50-MW wind farm in Aklan, with the first 36-MW expected to start commercial operations within this year.

PetroEnergy is also engaged in the exploration and development of petroleum resources.

It has minority interests in Service Contract (SC) 6A; SC 14C2; and SC 75 — all located in waters northwest of Palawan- Business World Online