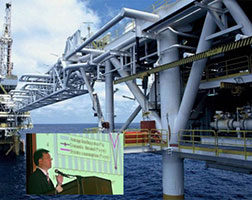 Alabama is blessed with the most successful and extensive artificial reef programs in the world. And it’s in the process of getting even better.

Thanks to a program called Rigs to Reefs, derelict gas and oil rigs will now become a part of the state’s artificial reefs instead of being sold as scrap metal.

Viosca Knoll 385 A, the first rig to be included in the Rigs to Reefs program, was deployed 40 miles south of Dauphin Island on May 21 this year.

“We have a real Rigs to Reef program now,” said Alabama Marine Resources Division Director Chris Blankenship. “We’ve made reefs out of a few rigs in the past, but we haven’t had a formal program like we have now. We work with the oil companies and gas companies and take possession of the rig in a formal agreement. Craig Newton, one of our Marine Resources biologists, went out to see the first rig deployed in the program.”

In addition to donating the decommissioned rigs, those oil and gas companies are also required to make a donation to the Alabama Artificial Reef Program according to the money saved by donating it to the Rigs to Reefs Program.

Newton said the companies left the legs of the rig in place and cut the jacket about 62 feet below the water line in 135 feet of water. The jacket was then hoisted and set down beside the base of the rig.

“Now there are two structures that make up the one reef site,” Newton said. “And it’s massive. It’s massive. It’s hard to fathom how big these rigs are. You go around the rigs with your bottom machine and track how big it is. Then when you go down and dive it, it seems even bigger. It is going to provide a lot of quality habitat.”

Blankenship said Marine Resources have two other rigs in line to be deployed in the Rigs to Reef Program.

“We have the agreements in place,” Blankenship said. “We’re waiting for them to be decommissioned. The paperwork is done. We’re just waiting on the companies now.”

One is a deep-water rig that will not be deployed like the first rig. The Viosca Knoll 780 sits in 737 feet of water. Plans are to cut that rig 90 feet below the surface and then tow the top part of the jacket closer in shore to a location within one of the pre-existing reef zones.

Blankenship said there is also a rig in Mississippi Sound that is being decommissioned. However, because of its location, it will not be reefed in place. It will be partially disassembled and moved to an offshore reef zone.

“Craig has done a great job of reaching out to these oil and gas companies about the rigs that were scheduled for decommissioning,” Blankenship said. “These companies are required to remove these rigs after a certain time after they are no longer productive. Now that oil and gas prices have come down, the companies don’t have as much money to work with, so they’re only decommissioning the rigs that they are required to remove. So there’s not as much of that activity going on right now.”

Newton said the habitat produced during the Rigs to Reefs program will be beneficial to vast array of sea life for many years to come.

“We expect a very diverse assemblage produced from this reef project,” Newton said. “We expect it to be a long-term, durable project. It adds to the overall diversification of our artificial reef program.”

Not only will anglers benefit from the Rigs to Reef Program, divers will also be able to enjoy their sport as well.

“I’ve already received several reviews from the diving community and they love it,” Newton said.

He also said that anglers will have to adjust their fishing techniques for these new reefs made from rigs.

“Fishermen are not going to be able to drop all the way to the bottom on these reefs or they’re going to get tangled up,” Newton said. “We suggest fishing for amberjack above the reefs or red snapper beside the reef. But if you drop your line all the way down while you’re sitting directly over the reef, you will likely get broken off. People fishing the tanks or chicken coops or whatever are less likely to get hung up. If they try that on these reefs made from rigs, they will most likely get cut off.”

Newton said MRD currently has permits to deploy two more rigs, including the aforementioned Viosca Knoll 780, which is located 56 miles south of Sand Island Lighthouse in 737 feet of water. That rig will be cut 90 feet below surface, and the top section will be towed to the Tatum-Winn South artificial reef zone and deployed in about 206 feet of water. The new reef will have about 100 feet of vertical relief.

The Main Pass 255 rig is located 54 miles south of Fort Morgan in 333 feet of water. The top section will be cut 105 feet below the water line and set down adjacent to the base.

For the rigs in federal waters, MRD has to coordinate with the Bureau of Safety and Environmental Enforcement, the U.S. Army Corps of Engineers, the U.S. Coast Guard and National Oceanic and Atmospheric Administration (NOAA) to gain permits to turn the decommissioned rigs into reefs.

The rig in Mississippi Sound is in state waters and not subject to the myriad regulations that MRD officials have to traverse for rigs in federal waters.

“We don’t have to have a special permit for that rig,” Newton said. ‘That one will be cut off 15 feet below the mud line and taken in large pieces to one of the offshore artificial reef zones. We plan to make multiple large reefs from this rig.”

Fisheries managers on the federal level are just now starting to include the benefits of the oil and gas structures in the Gulf of Mexico in fish stock estimates.

“The Rigs to Reefs Program keeps this material in the water instead of being recycled onshore,” Newton said. “The big thing is these new reefs are made from durable materials that will sustain numerous generations of anglers, and this will produce an abundance of reef fish, pelagic fish and support a stable offshore ecosystem.

“The amount of life and productivity of these rigs is enormous. The rigs have a nickname, Island of Life, because they support life from coral, pelagic and reef fish to even sea turtles. It’s very important that these structures remain in the Gulf. The Rigs to Reefs Program allows us to keep these highly productive structures from being removed.” – Montgomery Advertiser