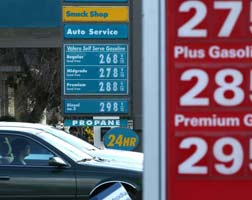 The steady rise reverses a record 123-day decline that started in September and ended last month.

Drivers recently spoiled by falling gasoline prices are now having to deal with a new reality: Higher costs at the pump.

The average price for a gallon of regular unleaded gasoline has increased every day for the past 28 days to a national average of $2.30 per gallon,according to AAA. The steady rise reverses a record 123-day decline that started in September and ended last month with fuel costs reaching a five-year low of US$2.03.

A major drop-off in worldwide oil prices drove the four-month long decline. Global oil oversupply cut oil prices by more than half between last summer and the beginning of 2015, but oil prices have slowly rebounded in recent weeks and the price most drivers pay at the pump has risen accordingly.

After slipping below US$45 in January, the price of a barrel of West Texas Intermediate crude oil has since climbed by more than 10%. Brent crude topped the US$60-per barrel mark earlier this month, but dipped slightly Monday to US$58.90.

AAA also notes that fuel prices tend to rise at this time of year due to the fact that seasonal maintenance typically happening at oil and gas refineries tends to put a drag on fuel production.

U.S. motorists are still paying US$1.11 less per gallon on average than they were at this point last year. The largest year-over-year savings gap experienced in recent months was US$1.25 per gallon. Drivers in Utah and Idaho are currently seeing the lowest price at the pump with an average of US$1.95 per gallon in those states. Hawaii, which tends to see the highest gas prices, is the only state where the average price for regular unleaded gas is more than US$3, with that state’s residents currently paying US$3.04 per gallon.

California is also seeing higher-than-average prices at US$2.95 per gallon, while motorists in Texas are paying US$2.12 per gallon.