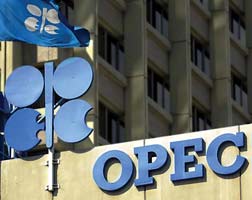 Opec is preparing to call an emergency meeting as oil producing nations fret over the slump in crude prices.

Nigeria’s oil minister and the current president of Opec, Diezani Alison-Madueke, said further price volatility would make it “highly likely that I will have to call an extraordinary meeting of Opec in the next six weeks or so”, before adding: “We’re already talking with member countries.”

In January the price of Brent crude touched $45 per barrel, a precipitous drop from $115 in June last year.

The comments, made to the Financial Times on Monday, are a sign of increasing panic among producers about the effect of lower oil prices on their economies.

They come a week after BP warned in its annual energy outlook report that weak oil prices could be in place for several years.

“The current weakness in the oil market, which stems in large part from strong growth in tight oil production in the US, is likely to take several years to work through,” the report said.

Opec is scheduled to meet next in Vienna in June, but in exceptional circumstances the cartel can convene emergency meetings. All 12 members – Algeria, Angola, Ecuador, Iran, Iraq, Kuwait, Libya, Nigeria, Qatar, Saudi Arabia, United Arab Emirates and Venezuela – must agree to such a move.

Alison-Madueke said: “Almost all Opec countries, except perhaps the Arab bloc, are very uncomfortable … It is hoped that [the price] will stabilise at no less than [roughly where it is currently trading at] $60, but we cannot be sure.”

The cartel scotched speculation in November that it might cut its targeted production level of 30m barrels a day in order to push up the price. The newsimmediately sent prices down 10% for the three main oil prices: US benchmark, West Texas Intermediate and the Brent global benchmark.

Alison-Madueke said she supported the November decision. “When you cede market share continuously, you drive yourself into oblivion,” she said, before adding that many Opec members “are going to suffer greatly from a drastic fall in the price”.

In November, Saudi Arabia convinced its fellow members that lower prices would eventually help the cartel’s market share by undermining rival producers, including those in the US where production costs are higher.

The theory was endorsed by BP’s report, which predicted that slower US shale output and higher global demand will lead to an increase in demand for Opec oil, which is expected to exceed its historic 2007 high of 32m barrels a day by 2030.

“Opec remains a central force in the oil market for the next 20 years,” BP’s chief economist, Spencer Dale, said.