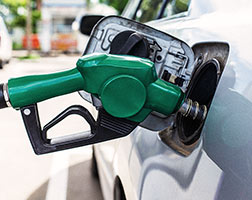 The technology is there. The big challenges will be finding customers and dealing with government regulations.

If you were to draw up a list of really useful inventions that could help fight climate change, a CO2-neutral fuel that can be used in conventional automobiles might be somewhere near the top. If we could continue using today’s cars without producing carbon emissions, that would be a big step forward, both economically and environmentally.

So, news that a German startup is successfully producing hundreds of liters of CO2-neutral fuel is a big deal—even if there are reasons to be skeptical at this stage.

The technology comes from a company called Sunfire, in Dresden, Germany. Together with Audi, Sunfire built a pilot plant that produces high-grade diesel using only renewable electricity, CO2, and water.

Using a form of electrolysis, Sunfire first splits water into hydrogen and oxygen. Then it takes CO2 and combines it with hydrogen to create a hydrocarbon (the fuel). Each step is powered by renewables, such as solar or wind—hence the CO2-neutral claim.

To demonstrate how the fuel works, the company recently put five liters into the official car of Germany’s education and research minister, Johanna Wanka. “If we can make widespread use of CO2 as a raw material, we will make a crucial contribution to climate protection and the efficient use of resources,” she said, trumpeting the technology.

According to Sunfire and Audi, the fuel carries no sulfur emissions and burns more efficiently than conventional diesel. What’s more, you can use it both as a blend with existing fuel, or on its own, meaning it’s potentially a direct substitute for fossil fuels—not something that just improves fossil fuels. The question is whether it can be produced at scale, what the cost might eventually be, and exactly where the necessary power for the process, which is significant, will come from.

In an email, cofounder Christian von Olshausen says the next step will be to build a much bigger plant, so Sunfire can get its prices down. The biggest obstacle may not be technology. First, Sunfire has to find a guaranteed customer for its product (Audi hasn’t committed yet). Second, it has to persuade the German government to relax tax rules that currently make the electricity going into the process prohibitively expensive. At the moment, each liter costs between US$1.15 and US$1.70 before distribution and retail, which works out at about US$6.37 a gallon, according to this critical analysis.

Those are big uncertainties. More to the point: many biofuel start-ups have successfully produced small quantities of useful fuel, only to struggle once they start looking for finance or build out their operations.

Nonetheless, the possibility of CO2-fuel is certainly tantalizing, even in a future where electric cars are cheaper and more practical for everyday drivers. “Electric cars are definitely more efficient in terms of electric energy usage and have their place in the market,” von Olshausen says. “But there will always remain applications which need the unbeatable energy density of liquid hydrocarbon fuels, like planes and long distance heavy vehicles.”