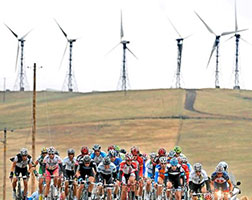 GOOGLE has spent US$1.5bil (RM4.8bil) around the world on clean energy projects cutting the pollution from millions of users clicking on search links, watching YouTube videos and sending e-mails, but now it’s found a powerful electricity source close to home.

The company is buying power from the Altamont Pass, one of the oldest, largest and most iconic wind farms in the United States.

The tech giant has no plans to brand the blades with its multicoloured logo, but its 20-year power purchase agreement with Florida-based NextEra Energy will dramatically transform the rolling, treeless landscape that connects the Bay Area with the Central Valley in California.

About 770 old turbines from the 1980s will be replaced this year by 48 new machines producing twice as much energy, enough to power Google’s corporate campus in Mountain View with 100% renewable power.

Google’s involvement is the latest green power play from a company that has spent a decade dropping money on wind, solar and geothermal projects from West Texas to South Africa and the Netherlands, and is an investor in Ivanpah, the massive solar thermal power plant built by BrightSource Energy in the Mojave Desert. Google says it operates with 35% renewable power worldwide. It has several previous deals with NextEra – for wind farms in Iowa, North Dakota and Oklahoma – and recently invested in Utah’s largest solar plant.

But unlike most of those projects, Google’s Altamont venture is more than a capital investment.

It will do more to reduce the Googleplex’s carbon footprint than any of the quirky projects on the corporate campus, from the 1.9 megawatt solar array to the plant fuelled by landfill gas.

Google is the second Silicon Valley tech giant to have recently announced a major local green energy project, after Apple’s announcement of an US$850mil (RM2.7bil) agreement to buy power and help build a 280 megawatt solar farm in Monterey County.

Google is paying for 50%, or nearly 43 megawatts, of the power that will be produced by harnessing the wind whipping through NextEra’s 18sqkm Altamont site beginning in 2016. The other buyer is undisclosed, but Florida-based NextEra said it is neither a utility nor a tech company. Neither Google nor NextEra is disclosing the price of the agreement.

“Not only do we think renewable energy is important from a climate change perspective, it also makes business sense,” said Sam Arons, an energy strategist at Google. The buy helps protect Google from higher energy prices in the future, he added.

Looking for new methods to power its energy-sucking data centres, Google began leading the way in wind investments years ago but Microsoft, Facebook, Yahoo and other tech companies have followed.