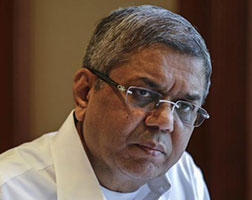 A surge in demand for renewable energy in India coupled with a capital injection from the country’s second-richest man will help wind turbine maker Suzlon Energy turn profitable after six years of losses, its chairman said.

Suzlon has been under pressure for a few years due to a slowdown in global sales and a surge in costs to service debt taken on in acquiring a German company in 2009, forcing it to restructure US$1.8 billion of debt after a bond default in 2012.

“Next financial year we will be in profit … 100 percent,” Tulsi Tantis said on Tuesday. He also said the company had reduced a major portion of its debt through asset sales and could exit the debt restructuring programme within a year.

Suzlon, which had outstanding debt of 165 billion rupees (US$2.7 billion) at the end of 2014, has sold some assets in the last couple of years and in January agreed to sell its German unit, Senvion SE, for US$1.12 billion.

The company, whose operations were impacted by tight working capital, also sold a 23 % stake in itself for $290 million to Sun Pharmaceutical Industries Inc’s billionaire founder Dilip Shanghvi and his associates.

Suzlon shares have doubled in three months, as investors cheered the firm’s efforts to reduce its leverage. The Indian government’s target to almost triple installed wind capacity to 60,000 megawatts (MW) by 2022 has also helped sentiment.

Prime Minister Narendra Modi has made renewable energy a priority for his government as he looks to address India’s chronic power shortages and fulfil an election promise of round-the-clock power to all Indians by 2022.

“In the next 3 years, we are expecting an average of not less than 40 percent growth in order book,” Tanti said, adding the company was actively looking to offload some non-core assets to further reduce its debt.

Following the sale of Senvion, which made up 70 percent of the company’s revenue in 2014, Tanti said the company was keen to grow its international business aggressively in North America, Latin America, China and Turkey.

These overseas markets together with India account for 70 % of the global wind energy market, Tanti said.

The company will, in the future, look to increase its 25 % stake in its joint venture in China, the world’s largest wind energy market, he said, but declined to give details.

Tanti said the company’s focus on wind and solar hybrid projects and large-scale offshore wind parks will help it double market share in India to 50 % in the next three years.