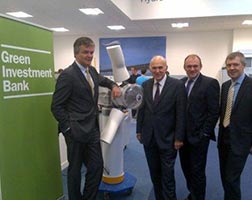 The UK’s “green” bank, which invests in environmentally-friendly infrastructure projects, is to be part-privatised.

The bank, thought to be the first of its kind, has invested about £2bn of public money in about 50 projects.

But critics called the sale “reckless” and questioned the government’s commitment to a low-carbon economy.

It is unclear how much of the GIB the government might sell, although the Financial Times has reported that it could be about 70%, with a sale price of well above £1bn.

The move is part of the government’s plan to sell off assets to pay down the deficit, and comes after the disposal of stakes in Royal Mail and Lloyds Banking Group.

The Edinburgh-based GIB was launched in 2012, pledging loans to “green” projects that have also attracted private sector money. It has invested in wind power, bio-energy, and renewal projects.

But there are restrictions on its borrowing, and MrJavid hopes that full access to the capital markets will increase its lending powers.
SajidJavid says the bank will be able to access much more capital if free from limitations

Speaking at the GIB’s annual review event in London on Thursday, MrJavid said: “The bank will be able to access a much greater volume of capital and deploy it across a much wider array of green projects.”

He added that the privatisation would mean “more money going into green innovations” and more support for “environmental entrepreneurs”.

MrJavid said the GIB had debunked the idea that green investment was incapable of making a profit.

“Its rigorous, commercial approach to investment has helped attract sovereign wealth funds, pension schemes and private equity investors to the sector for the very first time,” he said.

Chancellor George Osborne said in an earlier statement: “We want the Green Investment Bank to attract more investment and we will use the money we raise to pay down the national debt and deliver lasting economic security for working people.”
‘Rash and irresponsible’

MrJavid’s department has hired Bank of America Merrill Lynch to advise on the financial details and timetable for the sale.

Critics argue that a sale would dilute the bank’s purpose and undermine the UK’s commitment to the green economy.

Caroline Lucas, Green MP for Brighton Pavilion, called the sell-off plan “rash and irresponsible” and said any such move called into question the UK’s commitment to investing in a low-carbon economy.

“The government should keep at least a majority stake in the Green Investment Bank to ensure investor confidence is upheld and the commitment to low-carbon lending remains,” she said.

Think-tank E3G, which advised on the original plans to established a green bank, said a sell-off would be “reckless” and damage investor confidence.

Chief executive Nick Mabey said: “The Green Investment Bank is not just the government’s most lauded innovation in the war against climate change. It has kept investment in the real economy going at a time when bank lending had fallen to an all-time low. It has played a critical role in supporting the UK economic recovery. – BBC